Is MrBeast Really Shutting Down Magic Kingdom to Play a Massive Game of Hide-and-Seek? - Inside the Magic 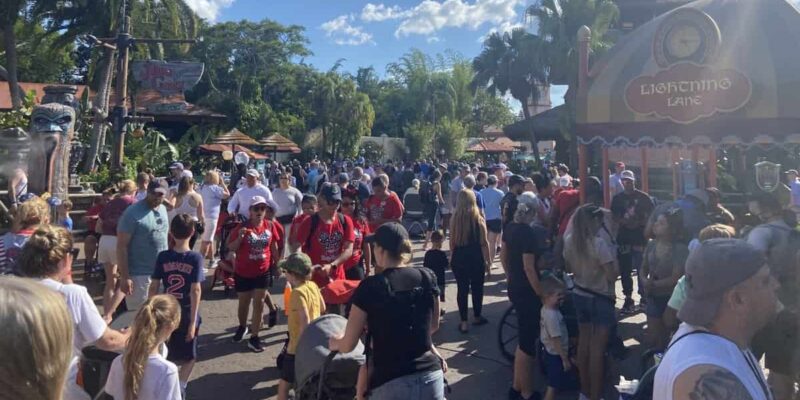 Walt Disney World Resort is known for hosting millions of Guests each year. Even with the pandemic shutdown, and subsequent health and safety crowd control measures, Disney Parks has rebounded rather significantly.

But with so many Guests stepping through the gates of one of the four theme parks on property, what would happen if just one — yes, one — took over the entirety of Magic Kingdom to film a YouTube video?

In recent years, The Walt Disney Company’s Parks division, as well as former CEO Bob Chapek, came under increasing fire over their magic-restraining antics. The implementation of the Park Pass reservation system alongside the 2 p.m. Park Hopper rule, as well as the eradication of FastPass+ in favor of the paid Disney Genie+ and Individual Lightning Lane systems, caused furor across the board with some Guests simply finding it too difficult, and pricey, to navigate a Disney World vacation.

With Bob Iger now reinstated as CEO of the The Walt Disney Company, all eyes are on whether Chapek’s successor (and predecessor) can ignite the magic many feel is missing from a Disney Park experience.

Despite this, though, Disney Parks have retained a strong attendance with some numbers exceeding those pre-pandemic. It’s evident that the Parks are busy, crowds are high, and wait times are long, so what would happen if one Guest wanted to remove every single person from Magic Kingdom to film a video?

The news that famous YouTuber MrBeast is taking over Magic Kingdom at Walt Disney World Resort is false. The source, Mouse Trap News, is a comical and satirical Disney Parks news site that writes stories they wish were true — according to their own mission statement.

However, some Disney fans have caught the “scoop”, believing it to be true and causing conversations of MrBeast’s takeover online.

The article claims that to rent out a Disney Park at the Orlando destination it will cost anywhere between $2,000,000 to $5,000,000 depending on how busy and popular that specific Park would be on the chosen date. It goes on to say that MrBeast will bring 100 contestants to the gates of Magic Kingdom before giving them 100 seconds to find a hiding spot — the winner of the massive hide-and-seek competition will net themselves a whopping $1,000,000.

Related: Fans Frustrated at Trend of Celebrities Kicking Guests Out at Disneyland

Sounds fun but unfortunately, MrBeast, known as Jimmy Donaldson, will not be shutting down the Magic Kingdom and Guests can rest easy knowing that their trip won’t be disrupted by the YouTuber.

It is not uncommon, however, that Guests (or celebrities) have shut down entire theme parks. Weddings, or wedding after parties, in front of Cinderella Castle are sometimes the cause or other special events such as Miley Cyrus’ closure of Disneyland Park in California for her 16th birthday party.

Would you love a massive game of hide-and-seek inside Magic Kingdom? Let us know in the comments down below!