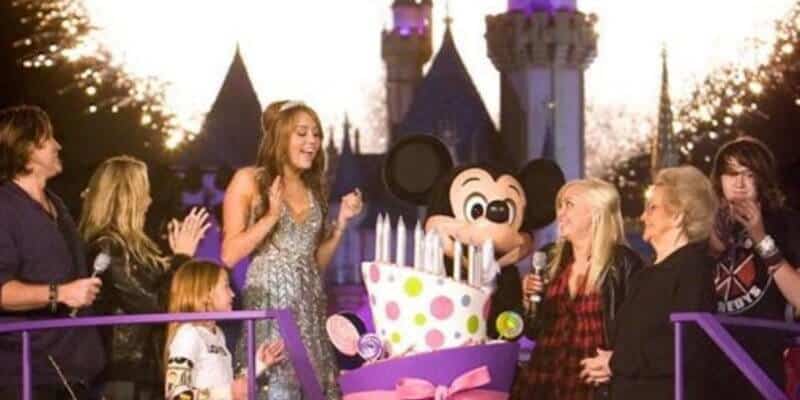 Alright, so I want you to think of the best birthday party you have ever had. Perhaps it was one with a lot of friends, a romantic evening, or, maybe you are like me, and you celebrate getting older at a place that helps keep you young! Having a Disney birthday is always a great option for a Disney fan, however, not many of us can say that we have had Disney World, Disneyland, or any Disney theme park completely shut down so that we could celebrate.

Former Disney Creative Entertainment Cast Member Sam Carter (@Cartersauce) reminded us of one of Disneyland’s biggest birthday celebrations when he shared a few projects he worked on, one of which including Miley Cyrus’s birthday.

Well, Miley Cyrus, who grew up playing the best of both worlds on TV as Hannah Montana, Disney Channel star, can say that she has had that happen to her. On her 16th birthday, Miley’s parents wanted to find a way to surprise the superstar but, according to Today, her father Billy Ray Cyrus said “Miley is really hard to surprise.” So, of course, they jumped to closing down Disneyland to throw her a private party.

“The theme park was closed for the supersized soiree, which included a four-song performance by the teen queen and a fireworks display above Sleeping Beauty Castle and 16 giant inflatable candles.”

The birthday ran as a special event to only 5,000 Guests who paid $5,000 per ticket and got to hear Cyrus sing four songs. Plus, big attractions such as Big Thunder Mountain and Pirates of the Caribbean were still open, so Guests got a concert and a theme park-filled evening all in one. Miley seemed to love the party saying, “My parents shut down Disneyland for me, so I’m good for a while.”

Disneyland Resort does not shut down its theme parks for any occasion, even Kim Kardashian had issues trying to close the park down for her child’s birthday, but for Miley, the exception made sense. First of all, there was still an event running where Disneyland was able to profit through heightened ticket entry. Second, Miley Cyrus was, at the time, one of Disney’s biggest stars. Disney fans idolized Hannah Montana, so it would make sense that her birthday party was kept “in the family” at a Disney theme park.

If you ever wanted to book out a Disney theme park, Guests can book sections when the park is not operating, such as the area around Tower of Terror at Disney’s Hollywood Studios in Disney World — but expect that a hefty price tag will be involved.

If you could have your birthday shut down one area of any Disney Park, what would you choose?