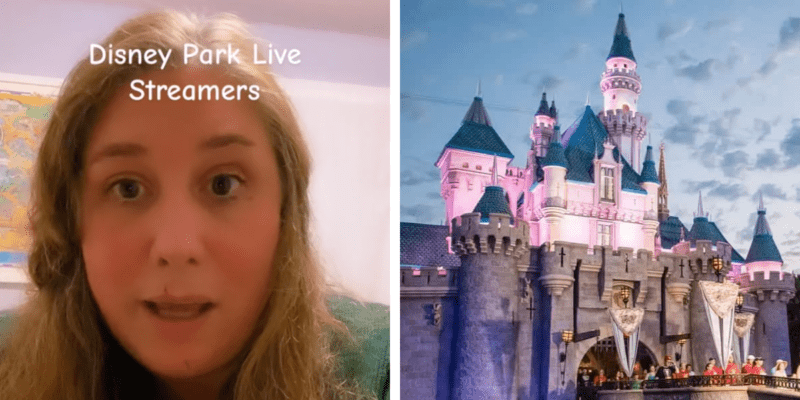 Live streaming is a hot topic in the Disney Parks fan community. The practice is mostly banned at Tokyo Disney Resort, and many Guests hope the strict streaming policy will make its way to Disneyland Resort and Walt Disney World Resort.

While Disney Park Guests feel live streaming is disruptive, some Disney Cast Members say it can be much worse. One almost lost her job after a live streamer handed her a cash tip on camera.

This week, one fed-up TikToker spoke out about another negative impact live streamers have on Disney Cast Members. From Jeanine (@jeanine.disney):

Jeanine said she used to follow many live streamers’ journeys through Disneyland Park and Disney California Adventure but changed her mind when she noticed a pattern of unacceptable behavior.

“I did not like how much they were asking for money,” she said. “Then recently I had heard through this app from some of my friends that they were having problems with these live streamers in the Parks… the entitlement coming from one specific creator about them repeatedly staying after Park closing hours.”

Commenters overwhelmingly agreed, with many Disney Cast Members thanking Jeanine for speaking out.

“As a cast member I’m very annoyed seeing the streamers after hours. because it takes us two hours to close and just want to go home,” said @eyeadore.

“I feel like they are killing the magic and surprise of Disney,” @scootapootin agreed.

What do you think of live streamers at Disneyland Resort?