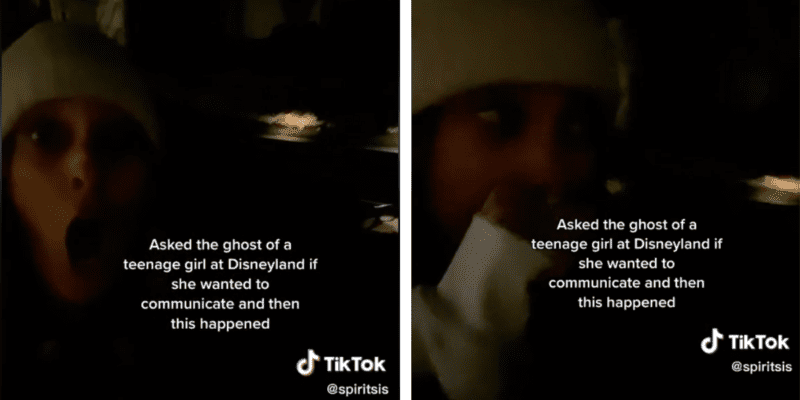 There have long been stories of ghosts at Disney Parks – not just at The Haunted Mansion! Disneyland Resort Cast Members frequently tell tales of saying goodnight to spirits on rides like “it’s a small world,” Space Mountain, and The Matterhorn.

While visiting Disneyland Park, the psychic medium alleged that a shy teenage girl made herself known. She asked the young girl if she wanted to communicate and received a shocking response on camera:

As the psychic medium filmed the dazzlingly lit exterior of “it’s a small world” Holiday, the lights suddenly went out. Disneyland Resort doesn’t intentionally shut the lights off, and this typically indicates issues with the attraction. The Guest was shocked and considered it proof of her ghost encounter.

In the comments section, the psychic medium elaborated on her experience at the Southern California Disney Park. “The place is crawling with spirit activity,” she claimed.

“I was proud. She did this a few times too,” she continued.

“He smiled and said ‘hi mr!’ and waved. I waved back and said ‘hey mijo what you doing in here the park is closed,’” he wrote. “A rush of freezing cold air hit me and I was shivering.”

“I used to work this attraction a few years back. I’ve heard stuff in there late closing times. I can feel a lot of spirits too,” wrote @illpayextraforguac.

Of course, we can’t confirm any paranormal activity at Disneyland Resort. Logic would tell us that the flickering lights resulted from electrical issues or ongoing maintenance problems on the classic Fantasyland attraction… But you never know!

Have you ever seen a ghost at Disneyland Resort?