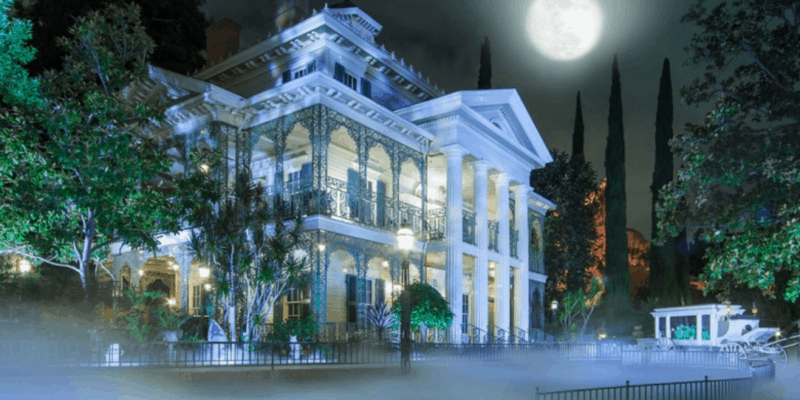 Disney Parks are known for their legendary entertainment, but one attraction seems to stand out above the rest regarding immersive storytelling: the Haunted Mansion. Walt Disney World’s version of the ride features a chilling detail that most fans have never noticed.

The Haunted Mansion is famous for its spooky set design, classic songs, and groundbreaking storytelling that was over a decade in the making. From supposedly encountering actual paranormal activities to rumors of people’s ashes being sprinkled in the ride, the Haunted Mansion can’t keep Guests out of its doorless halls.

Upon boarding a doom buggy in the Haunted Mansion attraction at Disneyland and Walt Disney World , the foolish mortal aboard encounters a hitchhiking ghost, spooky stories, an endless hallway, cloaked Hatbox Ghost through classic showpieces and ageless thematic elements.

One element, in particular, let Guests see a glowing orb pass by one of the Haunted Mansion’s windows at both Disneyland and Magic Kingdom Park in Orlando, Florida — giving the effect that a ghostly resident resides in the Haunted Mansion ride.

In the video above, you can see a small, slow-moving glowing orb floating inside the top-left window of Magic Kingdom’s Haunted Mansion.

The small and sometimes unnoticeable effect date backs to 1992, but the Traveling Light effect could have been present in Walt Disney World’s version of the ride on opening day in 1971.

To this day, fans can still witness this glowing orb at Walt Disney World’s legendary attraction in Liberty Square.

This effect is one of the most economically impressive effects at the Haunted Mansion, as it already tells a spooky story before Guests enter the mansion’s doors. It’s terrifying for the young mind, allowing one’s imagination to formulate a backstory to the slow-moving, ill-fated glowing light that traverses the haunted hallways at night.  Could it be Constance Hatchaway awaiting the return of her captain? Or perhaps a house servant checking out the fatal screams they heard in the halls so many years ago?

The souvenir album from the Haunted Mansion at Disneyland Park at the Disneyland Resort in the late 1960s included a chilling piece of backstory to the house:

Strange sounds come from within the walls, and it’s said that eerie lights have been seen, both in the attic windows, and in the graveyard at the side of the house.

Though it goes widely unnoticed, it puts the lyric “weird glows gleam where spirits dwell” into a new perspective.

The “eerie lights” were made real by Imagineering, furthering the immense attention to detail in a Disney theme park.

Reports of a Real Ghost

We weren’t kidding when saying you could see a “real” ghost at the Haunted Mansion, given the fact that many Cast Members have reported this glowing orb as a real encounter with a spirit.

“I was a Sweeper in 1985.  Late one summer night I was assigned to Haunted Mansion on a closing shift.  This meant I was responsible for a final sweep of the queue and to clean out its bordering flower beds. [….] It was dark.  The other sweepers in New Orleans/Bear Country were far off doing their own closing routine.  I was alone.  There I stood in the large bullpen near the east side of the Mansion…”
“The tiny leaves of the branch ran along the back of my neck like fine fingers. I started and stood up straight. Then I saw it. I had been going to Disneyland for umpty years and had been working there for almost two. I had never seen it before.”
“My eye caught what looked like a yellowish ball of light bobbing gently past the inside of one of the upper story windows of the Mansion. As soon as I saw it, it was gone. I blinked, looked away, then glanced back up. Nothing. Well…I decided I’d better finish up my flower bed, sweep the queue and get out of there. I didn’t even have a radio with me. Nope. Just me. And the Mansion.”

“There it was. The ghost. A flickering light moved across the inside of one of the windows again. There was NO mistaking it this time! Then…it moved on to the NEXT window! When it proceeded to pass in front of the NEXT window, then I knew. Darn Imagineers! This special effect was clearly an intended part of the attraction and could only be seen in the dark of night. What appeared to be the ghostly light of a candle moved along inside each of the windows, as though the widowed bride were marching around inside her home, waiting for the return of her captain.”

Like the Stretching Room, Pepper’s Ghost Effects, Madame Leota, or spooky busts in the queue of the Haunted Mansion, this Traveling Light effect can trick the mind into thinking that their experience with the afterlife is real!
This inexpensive and subtle detail can do more scaring than the actual ghosts themselves.

Did you know about this Haunted Mansion fact? Let us know in the comments below!