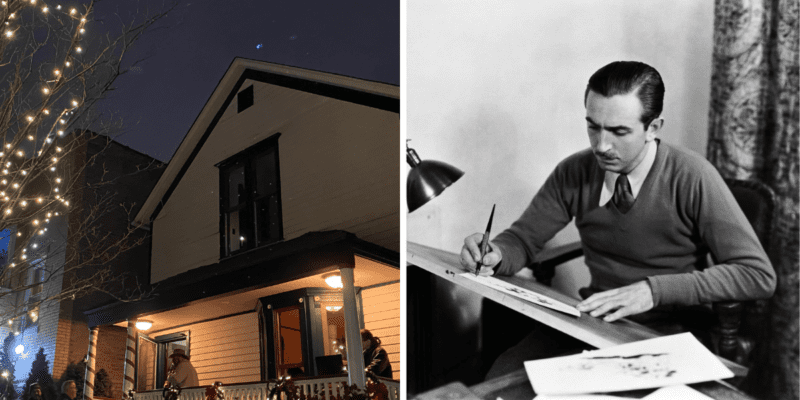 On December 5, 1901, Walter Elias Disney was born to Elias Disney and Flora Call Disney on the second floor of a quaint cottage in Chicago, Illinois.

Though young Walt and Roy Disney later moved to Marceline, Missouri – the town that inspired Main Street, U.S.A., at Magic Kingdom and Disneyland Park – he spent the first four years of his life in the quiet Hermosa neighborhood.

The home spent the next nearly 100 years changing hands and undergoing renovations that made it practically unrecognizable as the small cottage Elias Disney built for his family. In 1991, the City of Chicago attempted to designate it as a historic landmark, but the homeowner fought the designation and won.

The house went up for sale in 2012 and was purchased by two entrepreneurs and Theme Park fans in late 2013. The two later created The Center for Childhood Creativity and Innovation at The Walt Disney Birthplace, eventually shortened to The Walt Disney Birthplace and given 501(c)(3) non-profit status. Tripp Avenue, where the home is located, was given an honorary street name, “Disney Family Avenue.”

Over the past nine years, the house has undergone restoration and renovations so that, one day, it can open as a welcome center for visitors from around the world. While the inside is not yet ready, The Walt Disney Birthplace welcomed visitors into its front lawn Monday night to celebrate Walt Disney’s birthday for the first time in five years.

Miss Illinois USA 2022, Angel Reyes, was the Guest of Honor at the birthday celebration. Reyes lives in the Hermosa neighborhood and said when competing for her title, she used being born in the same community as Walt Disney as her “fun fact.”

“I then went on to quote one of Walt Disney’s famous quotes, ‘All of our dreams can come true if we have the courage to pursue them,’” Reyes said.

The event also featured students from Walt Disney Magnet School, also in Chicago, who spoke about what Disney’s contributions to the community meant to them. Students from nearby William P. Nixon Elementary School sang “Feliz Navidad” and “Happy Birthday.”

The Walt Disney Birthplace also announced that December 5, 2022, had officially been declared Walt Disney Day in Chicago by Mayor Lori Lightfoot. A statement from Lightfoot described Walt Disney as “a true renaissance man” and recognized his contributions to the arts.

The final Guest of the night was Santa Claus himself, who coyly recalled visiting the home 121 years ago when Walt Disney was born. “It’s been a long, long time since I’ve been in this house. It’s really awesome to be here and see all these smiling faces.”

Hundreds of Guests attend the ceremony. Each family received sweet treats, a Star Wars or Santa Claus book, and a candy cane from Santa. Most importantly, almost every Guest left with a smile on their face.

Did you celebrate Walt Disney’s birthday?