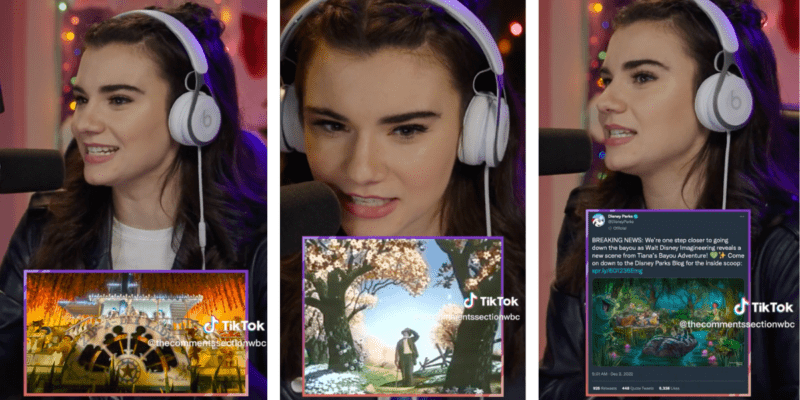 The Save Splash Mountain movement has ramped up in the weeks leading up to the ride’s permanent closure in Magic Kingdom at Walt Disney World Resort. After a Republican Congressman spoke out in defense of the Song of the South (1946) themed water ride, some desperate fans begged Elon Musk and Ron DeSantis to save the ride.

While a closing date hasn’t been announced for the Disneyland Resort version of Splash Mountain, both rides will reopen as the Princess and the Frog (2009) themed Tiana’s Bayou Adventure in 2024. Princess Tiana is “Almost There!”

Still, the retheme incites division among Disney Parks fans. Now, The Daily Wire+’s news and review show, The Comments Section with Brett Cooper, is getting involved. They shared this clip on TikTok this week, writing, “Come on, Disney 🙄:”

In the three-minute clip, Cooper discussed the ride’s history and connection to Song of the South. She claimed that while she enjoyed Princess and the Frog, the Splash Mountain retheme “is not as innocent as they want people to believe.”
“They are doing this because of racism. Obviously. Because why does anybody do anything in 2022?” Cooper sarcastically asked.
While Cooper acknowledged that Song of the South is “very controversial” with “racist undertones,” she said the film “looked so cute” while watching the trailer.
“It is literally a film about that old man, Uncle Remus, telling those kids stories. It’s very, very innocent,” Cooper said. “…It seems very tame. That trailer was precious.”
“Wrong, it is severely racist and must be canceled…These peoples’ takes are hard to stomach on their own,” she joked, referring to an article from The Guardian that discussed the racism in Song of the South.
Cooper also mentioned that James Baskett (Uncle Remus) won an Oscar for the film but neglected to note that it was an Honorary Academy Award lobbied for by gossip columnist Hedda Hopper. It was not presented at The Academy Awards, and Baskett was not even allowed at Song of the South’s premiere because of segregation laws in Atlanta.
Additionally, the NAACP and groups of Black veterans protested the film premiere in 1946. Song of the South never mentions slavery and presents an Uncle Tom-Esque, idyllic view of Post-Civil War America for Black Americans.
“Entertainment is being poisoned every single day by a pervasive victim complex and this need for sensitivity warnings and political correctness,” Cooper concluded. “And now it has made its way to Theme Parks. The stupidity is never ending.”

Despite petitions and Twitter campaigns, Splash Mountain will close next year to make way for Tiana’s Bayou Adventure. Inside the Magic will continue to report updates about the retheme and the water ride’s closure at Disneyland Resort. The Song of the South (1946) ride will remain the same at Tokyo Disneyland, though the Disney Park recently removed the ride’s anthem, “Zip-A-Dee-Doo-Dah,” from its music loop. From Disney:

What do you think of the Splash Mountain retheme? Are you excited to head down to New Orleans on Tiana’s Bayou Adventure?