The Iconic Duo Behind Your Favorite Disney Songs - Inside the Magic 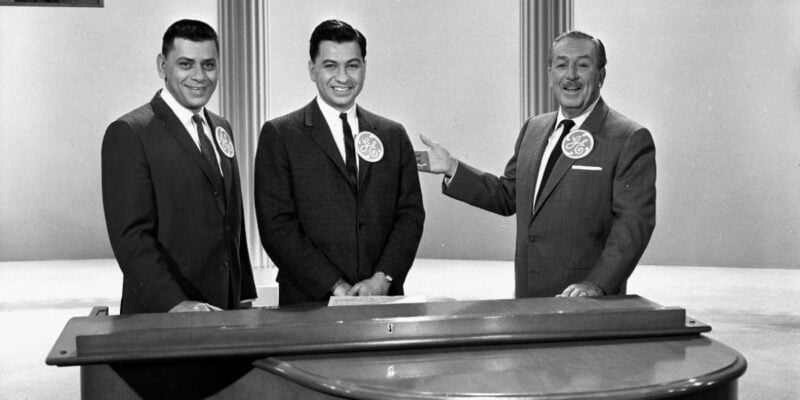 “It’s a Small World,” “Supercalifragilisticexpialidocious,” “The Tiki Tiki Tiki Room,” and “Winnie the Pooh”- if you’re a Disney fan, you know these songs by heart, and even if you’re not a Disney fan, chances are you’re familiar with these iconic Disney songs.

They’re all familiar household songs and have a certain ring to them, but have you ever wondered about the history behind these songs? If not, you should. These songs, along with so many other Disney hits, came from the creative minds of two Disney Legends: Richard and Robert Sherman, known commonly as the Sherman brothers.

Who Are the Sherman Brothers?

So, you might be asking yourself, “Who are these legendary brothers?” It all started in Manhattan in the 1920s. Robert Sherman was born on December 19, 1925, and Richard Sherman was born on June 12, 1928. Their father, Al Sherman, was a Tin Pan Alley songwriter who wrote Depression-era songs, such as “Potatoes Are Cheaper, Tomatoes Are Cheaper, Now’s the Time to Fall in Love.” This song became one of comedian Eddie Cantor’s classic songs.

The Shermans moved to Beverly Hills in 1937, where the boys attended Beverly Hills High School, and Robert wrote and produced plays for radio and stage productions. After high school, both of the brothers were drafted into the U.S. Army.

In the Army, Richard was a conductor for the Army band and glee club from 1953 until 1955. And Robert became a hero, leading a squad to free the Dachau concentration camp in 1945. Not long after, he was awarded the Purple Heart after being shot in the knee. While he was healing in Britain, he began to love English culture and literature.

Both brothers attended Bard College as well. Richard majored in Music, and Robert studied English Literature and Painting, obtaining degrees in 1949. These became passion projects for him, as he would write and paint throughout his life.

The brothers began writing songs together in the 1950s, with their first song, “Gold Can Buy You Anything But Love,” which was recorded by Gene Autry and was played daily on his radio show. However, they began to rise to fame in 1958, with the song “Tall Paul,” which was sung by Mouseketeer Annette Funicello. This rose up to number seven on the charts, selling 700,000 singles.

After the success of this song, the brothers began working more with Annette, writing top 10 hits, such as “Pineapple Princess.” This is when Walt Disney saw their potential and hired them as staff composers.

They also wrote music for television shows, including Zorro and Walt Disney’s Wonderful World of Color.

Related: Fantasmic! AND World of Color RETURNING to Disneyland!

Though the pair are most well-known for their Disney contributions, they’ve also written for other non-Disney projects, including song scores for Chitty Chitty Bang Bang (1968), Snoopy Come Home (1972), Charlotte’s Web (1973), and the Broadway musical, “Over Here!”

Additionally, they developed the screenplays and scores for films including Tom Sawyer (1973), Huckleberry Finn (1974), The Slipper And The Rose (the 1976 Royal Command film), and The Magic Of Lassie (1978). The brothers’ music also inspired some of their works to hit Broadway, including “Chitty Chitty Bang Bang” and “Mary Poppins.”

Besides Disney movies and television, the Sherman brothers also wrote a number of hit songs for Disney Parks attractions, including the songs for Walt Disney’s Enchanted Tiki Room, “it’s a small world,” Carousel of Progress, Journey Into Imagination with Figment, and Meet the World at Tokyo Disneyland.

For the Enchanted Tiki Room, the Sherman brothers wrote the iconic song “The Tiki, Tiki, Tiki Room.” When Walt Disney had asked them for ideas for this song, they suggested a calypso beat, similar to the one from the production of Swiss Family Robinson (1960). That way, the song would have a sound Guests could remember, while explaining to them what they would hear and see in the show.

The duo also wrote “It’s a Small World” for the attraction of the same name. This attraction was going to be showcased at the New York World’s Fair in 1964, and the brothers were asked to create a song for the UNICEF pavilion at the show, called UNICEF Salutes the Children of the World.

This was a challenging task, and the pair worked with Imagineer Marty Sklar to develop a song that would have music from different countries without sounding like a cacophony. This is where the simple lyrics of “It’s a Small World” came into play, promoting a message of peace and unity. As Richard Sherman said:

“People think it’s a little novelty. It’s a prayer for peace. We have to learn to live together and respect each other, or we’re going to blow each other up.”

Even Marty Sklar noted how important this attraction is to the Parks:

“It’s probably the most important thing that is in any of the parks. Wouldn’t it be wonderful if people acted like the words to that song?”

These composers also created the song “There’s a Great Big Beautiful Tomorrow” for Carousel of Progress. This song was developed at the request of Walt Disney, who envisioned this as a segue between the show’s acts. This show almost served as Walt’s theme song, as he was optimistic about the future and excited about the possibilities that technology would bring.

The song “One Little Spark” from Journey Into Imagination with Figment serves as the main theme of this attraction, inspiring Guests to “spark” their imagination.

And similarly, another song the brothers wrote was “Magic Journeys,” the theme for the short film of the same name that represented a view of a child’s imagination. This had opened in 1982 in the Journey Into Imagination Pavilion in EPCOT and featured a preshow presentation, with yet another Sherman brothers song: “Makin’ Memories.”

The duo also created the song “Meet the World,” also known as “We Meet the World With Love,” for the Meet the World attraction at Tokyo Disneyland, which was an audio-animatronic ride in Tomorrowland that showcased Japanese history.

These are just some of the several incredible songs that Robert and Richard Sherman wrote and composed for all Disney fans to be able to enjoy and sing along with them.

Recognition for Hard Work and Talent

The brothers received four Academy Award nominations and a Grammy award during their Disney career. They also wrote more than 200 songs for 27 films and 24 TV shows. Both men are members of the Songwriters Hall of Fame and were both awarded the National Medal of the Arts at the White House in 2008. Additionally, in 1990, the Sherman brothers were named Disney Legends in the music category.

The brothers also won two Oscars for best score on Mary Poppins, as well as best song for “Chim Chim Cher-ee.” Another iconic song from the film, “Supercalifragilisticexpialidocious” entered the Billboard Hot 100 in August 1965. Additionally, “Feed the Birds” became one of Walt Disney’s favorite songs, and he often requested that Richard play it in Walt’s office on Fridays.

Robert Sherman explained why this song meant so much to Walt:

“The point of the song—that it doesn’t take much to give a little kindness—was what really registered with Walt.”

In 1998, the brothers wrote an autobiography, entitled “Walt’s Time: From Before to Beyond.” Disney also released two retrospective collections of the brothers’ legendary tunes. In 1992, the collection released was called “The Sherman Brothers: Disney’s Supercalifragilistic Songwriting Team,” and in 2009, the second compilation of music released was called “The Sherman Brothers Songbook.”

Additionally, a documentary was filmed about their lives, entitled The Boys: The Sherman Brothers’ Story (2009). The pair were also portrayed by B.J. Novak and Jason Schwartzman in the film Saving Mr. Banks (2013), which is the untold story of how the Mary Poppins film came to be.

Related: Legendary Disney songwriters The Sherman Brothers to be honored at special event by The Academy

Robert Sherman passed away on March 5, 2012, in London. He had moved there in 2002 and still worked on writing and painting, continuing to partner with Richard to write songs long-distance. Though Robert is no longer with us, his and Richard’s legacy remains alive and well. Every time you watch a Winnie the Pooh film, have “It’s a Small World,” stuck in your head for a few hours at the Parks, or take the time to show kindness like in “Feed the Birds,” the legacy of the brothers’ meaningful music still lives on.