Disney recently released anniversary editions of three classic animated films spanning three decades of cherished movie history. But while these releases, for the most part, look fantastic on Blu-ray for the first time, the real gems lie within the surprising bonus features also included.

The Sword in the Stone

The classic tale of King Arthur was Disney-fied in 1963, instantly becoming another in a long line of classic animated musical films. Though many of its characters aren’t quite as instantly recognized as the famous Disney Princesses, Merlin certainly is, easily the standout star of the movie. And with Sherman brothers music featured in the film, Disney simply couldn’t go wrong.

The movie looks better than ever in HD, impressively crisp for a film hand animated 50 years ago. But it’s in the bonus features that this release really impresses, including a great variety of vaguely-related extras, such as the classic Mickey Mouse short “Brave Little Tailor.” Though by no means exclusive to this release, it’s a nice treat to have handy. Also included is a wonderful sit-down interview with the Sherman brothers from many years ago, inherited from previous DVD releases, but no less entertaining now. It’s definitely the best release of this film to date. 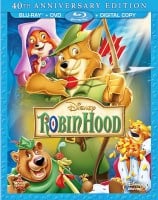 Of the three movies being reviewed here, this “Robin Hood” Blu-ray release is both the most and least impressive at the same time. It’s extremely impressive because of the incredibly picture clarity of the film. I have never seen this movie look this good. It’s presented in 16×9 widescreen format, a change from previous releases which offered the traditional “full screen” variation fitting 4×3 screens. But neither is wrong. The film was made with both formats in mind, offering an “open matte” for TV presentations and widescreen for theaters. So while technically there is less of the picture seen on this release than on previous DVDs, everything remains framed properly so nothing important is ever lost. It is not pan-and-scan either.

Sadly, as good as the movie itself is, the bonus features are somewhat boring. A singalong and some not-so-interesting deleted scenes are among the less interesting extras. Fortunately, as with “The Sword in the Stone,” there is a Mickey Mouse short included for extra entertainment, “Ye Olden Days.” 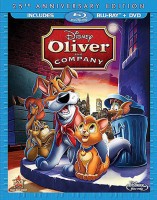 “Oliver and Company” is definitely not for everyone. Those opposed to being transported back to the 1980s should steer clear. As the opening title sequence shows off real-life New York to the sounds of Huey Lewis, it’s obvious what decade this movie is from. And the ’80s time machine continues as Billy Joel and Bette Midler provided their vocal stylings with plenty of synthesizer. But looking past all that, the film does feature some memorable characters and an enjoyable retelling of Dickens’ classic “Oliver Twist,” though those characters never seem to have caught on over the years – not even with Cheech Marin’s voice attached.

The Blu-ray release looks good, but not great. It’s surprisingly grainy, more so than the two considerably older films listed above. It seems Disney didn’t bother to give “Oliver and Company” the full restoration treatment. Likewise, the included short films aren’t all that fun, though it is nice to have more of Disney’s animated history included. Overall, it’s a release definitely designed only for an audience with fond memories of this film.

All three releases are available now from Disney at major retailers on Blu-ray.