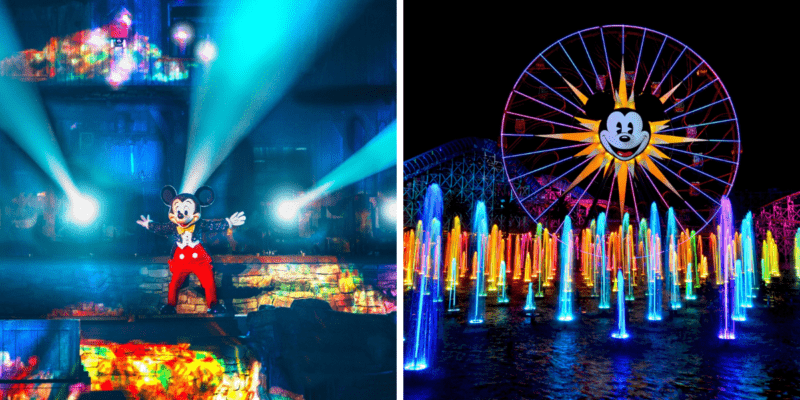 Guests at Disneyland Resort have seen many changes to the Park experience since its phased reopening after the pandemic.

Fan-favorite shows Fantasmic! and World of Color have been missing from the magic for a long time now, with Guests anxiously waiting for Mickey Mouse and friends to once again light up the skies of Disneyland Park and Disney’s California Adventure.

Now, we have some fantastic news! Disney has revealed these shows WILL be returning soon!

At Destination D23, Chairman of Disney Parks, Experiences and Products Josh D’Amaro revealed that both World of Color and Fantasmic! will be returning to Disneyland in 2022.

Fantasmic! is one of Disney’s most beloved shows, featuring characters like Mickey Mouse, Ariel, Maleficent, Tinker Bell and more!

World of Color premiered at Disney’s California Adventure in 2010 and includes over 1200 musical water fountains, lights, fire, lasers, and fog, with high-definition projections on mist screens to make magic across Paradise Bay.

The show is inspired by Walt Disney’s Wonderful World of Color anthology television series, with music from the Sherman Brothers.

The D23 event held at Disney’s Contemporary Resort in Walt Disney World also revealed that Fantasmic! will be returning to Disney’s Hollywood Studios next year.

The official description of this Disneyland nighttime spectacular reads:

Fast asleep, Mickey dreams he is the Sorcerer’s Apprentice. With a wave of his hands, he conducts scenes from Fantasia across enormous screens of water while brilliant sparks burst overhead. Pink elephants, swashbuckling pirates, princesses and more appear on and around the Rivers of America.

Are you excited for these shows to return? Let us know!