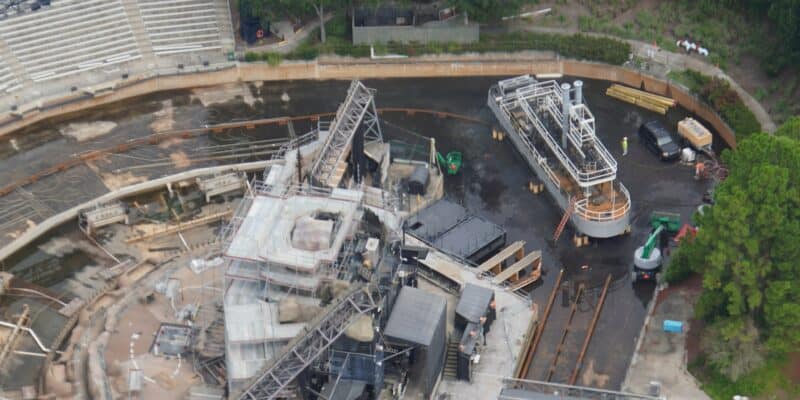 Due to the ongoing pandemic, Disney made the decision to halt nighttime shows, including Fantasmic!. The good news is that as we continue to move forward, the theme parks have brought back certain shows including Happily Ever After, and EPCOT Forever. The bad news is, Fantasmic! remains closed with no opening date in sight.

Recently, we reported on the iconic ship shifting positions, meaning that Imagineers are clearly working on this area of the theme park, though we are unsure of exactly what type of work is being done at this time.

Despite the ship shifting positions, the lagoon itself continues to look deserted. Bioreconstruct shared photos to Twitter that show the current refurbishment status of the Fantasmic! lagoon, along with the caption:

Aerial look at the refurbishment of Fantasmic.

Aerial look at the refurbishment of Fantasmic. pic.twitter.com/iGj0XtDxsh

In the photos above, you can clearly see that the lagoon itself still looks like a construction site as it remains drained.