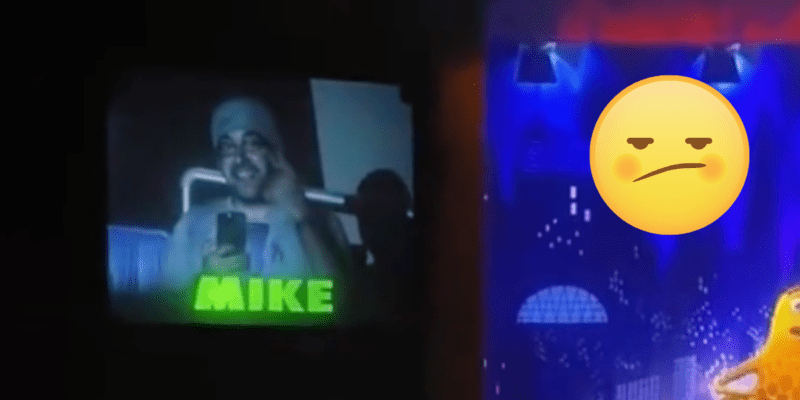 Live streaming is a hot topic in the Disney Parks fan community. The practice is mostly banned at Tokyo Disney Resort, and many Guests hope the strict streaming policy will make its way to Disneyland Resort and Walt Disney World Resort.

While Disney Park Guests feel live streaming is disruptive, some Disney Cast Members say it can be much worse. One almost lost her job after a live streamer handed her a cash tip on camera.

This weekend, a Disney Cast Member got hilarious revenge on a live streamer in the audience of Monsters, Inc Laugh Floor. As the monsters retold the story of Pixar’s Monsters, Inc. (2001), they selected a man streaming with his iPhone to star as the one-eyed Mike Wazowski.

“This is why I avoid Laugh Floor,” @disneyparksdiy wrote of the experience, which he shared on TikTok:

This is why I avoid Laugh Floor #lol #disney #disneyparks #disneyworld

“Now that’s Mike Wazowski with one eye, not one iPhone,” the monster joked. “So can you give us one eye, please?”

Related: Despite Tim Allen’s Approval, Disney Plus Hit With Boycott For “Praising Satan”

Despite fan complaints about live streamers, there was no disruption here. The live streamer and the monsters laughed off the joke, and the show continued.

Help power the Monster World with your laughter at Monsters, Inc. Laugh Floor in Tomorrowland at Magic Kingdom. From Walt Disney World Resort:

Got a Good Joke?

Text your favorite joke before the lights go down and it could be used in the show! Watch Mike Wazowski’s video while you wait and listen for the instructions. Standard text messaging fees apply.

Do you think live streaming should be banned at Walt Disney World and Disneyland Resort?