Veteran 'Indy' Actor Plays Coy About 'Dial of Destiny' Return - "I Could Tell You..." - Inside the Magic 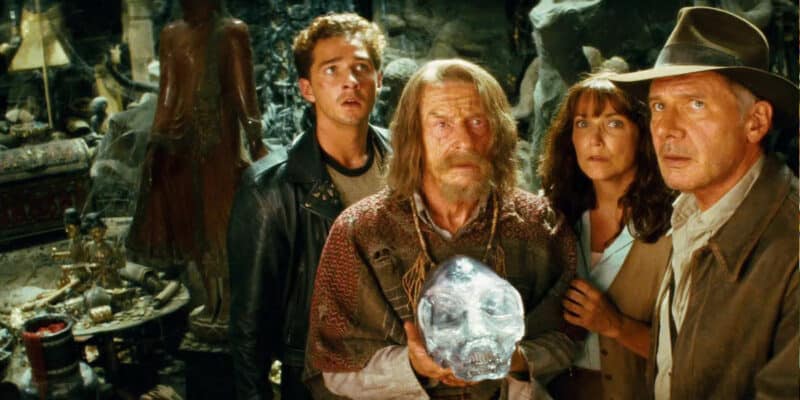 Could the new film see the return of Karen Allen’s Marion?

Indiana Jones and the Kingdom of the Crystal Skull (2008) wasn’t the favorite of fans of the franchise. Many aspects didn’t feel like an Indiana Jones film that audiences had come to know and love.  Things like aliens, the communist villains, and even Indy’s (Harrison Ford) attitude towards the whole adventure in the second and third acts seemed off. The lists go on and on with the problems in Crystal skull, but there were things that the fourth installment in the franchise got right.

The film’s opening, minus the fridge debacle, of course, felt like a classic Indy adventure: fans got to see Indy (Ford) duke it out with some villains and still hold his own. There was drama, suspense, and some great comedy, and the set up to another great adventure to be seen in the film. For one reason or another, things went downhill at the start of the second act, but moments and devices still shone through as bright spots throughout the rest of the film.

One such plot point was the return of Marion Ravenwood (Karen Allen). The heroine, introduced to audiences in Raiders of the Lost Ark (1981), was a welcome addition to the cast, and audiences were thrilled as she was brought back to the company and adventures of Indiana Jones (Ford). The chemistry between the two was just like they’d never been apart since 1981, and offered another ’ride into the sunset’ moment during the film’s finale, as the two finally tied the knot and were married.

Since the announcement of a fifth film in the Indiana Jones franchise, fans have been buzzing about the possibilities: who would be coming back? Would the film acknowledge Crystal Skull? How can Indiana Jones as a franchise make a comeback after that film? The trailer, released earlier this month, answered just a few of those questions and teased some tantalizing possibilities with a stunningly de-aged Harrison Ford taking on Nazis once again. This trailer also saw the return of another Raiders era hero, Sallah (John Rhys-Davies), which begs the question, who else could return?

In a recent interview with Showbiz411, covered by Distractify, Karen was asked pointedly if she would return to the role and appear in Indiana Jones and the Dial of Destiny (2023). The actress jokingly responded,

Very seldom do actors with nothing to do with a film say things like, “I can’t say.” It’s statements like this, and other in which the actress hasn’t ever really said “no”, that lead fans to believe that she will be making an appearance in Dial of Destiny. After all, Indy (Ford) is still wearing his wedding ring in the film, so it’s safe to assume they’re not ignoring his marriage to Marion (Allen) in the previous film. If indeed she is in the Indiana Jones film, it does seem like it will be a smaller role, or a cameo, as she isn’t seen taking part of any of the adventures shown in the trailer.

Indiana Jones and the Dial of Destiny hits theaters June 30, 2023, and stars Harrison Ford as archaeologist Henry Jones Jr./Indiana Jones, Phoebe Waller-Bridge as Helena, and Mads Mikkelsen as Voller in an all new adventure set in 1969.

Do you think Marion will appear in the film? Why or why not? Let us know in the comments below!