"Unfavorable" Magic Key Holders Lay on Ground, Get Dragged Away After Being Blocked Out of Disneyland - Inside the Magic 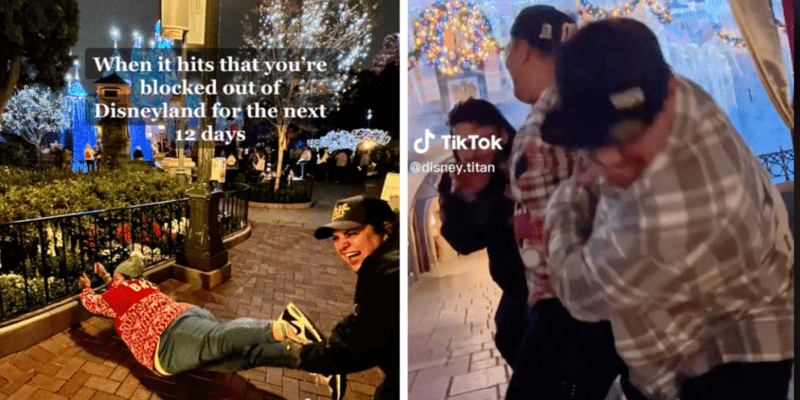 It’s a difficult time to be a Magic Key holder as block-out dates, and Park Reservations continue to make visiting Disneyland Park and Disney California Adventure more difficult.  Passes sold out the second they went on sale earlier this year, even after former Disney CEO Bob Chapek referred to the Annual Passholders as “unfavorable” Guests.

Last week, we reported a Magic Key holder who asked recently returned Disney CEO Bob Iger to reconsider the 12-day block-out during the holiday season at Disneyland Resort. For the first time, all Magic Key tiers are blocked out of the Southern California Disney Park in December.

Other Magic Key holders have joined in posting their heartbreak about the Disney Parks block-out on social media, particularly TikTok. @parkhoppingduo shared the following hilarious video of one Passholder dragging another off the ground at Disneyland Park:

♬ Get You The Moon – Kina

@disney.titan shared a similar video of his friends dragging him away from Sleeping Beauty Castle on Main Street, U.S.A.:

Some got even more creative. @justaguyandagirl jokingly tapped their MagicBand+ at a gas pump, then tried to enter Universal Studios Hollywood with their Magic Key:

A fun-loving Universal Team Member played along with the Guest, telling them they needed to go down the highway to Anaheim.

Others shared similar sentiments less dramatically. “When you pay $1600 for RENT and aren’t allowed into your home!” @disneyconnect_ wrote in a video overlooking the moat around Sleeping Beauty Castle:

These videos are a few of many from disappointed Magic Key holders hoping to spend a magical Christmas at Disneyland Resort. Some even paid hundreds for a single-day ticket to be at Disneyland Park on Christmas day.

The block-out dates are one of many changes Disney Parks fans hope Disney CEO Bob Iger will reverse in the next two years.

Do the Disneyland Resort block-outs impact you? Please share your experience with us in the comments.