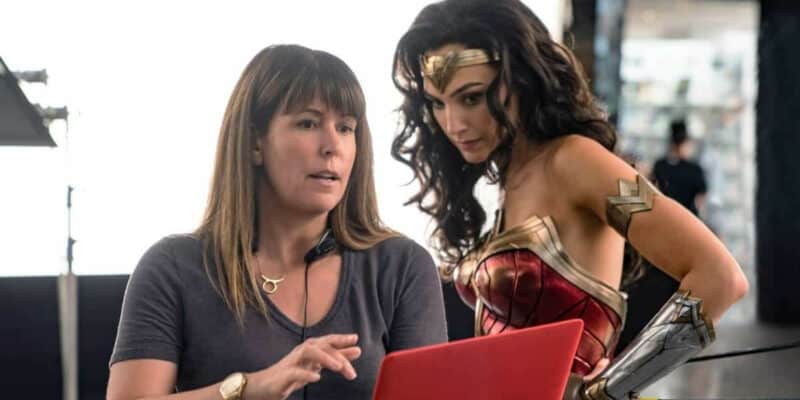 Now we know why production has stalled – Patty Jenkins.

When the DC Extended Universe began it’s upward climb to compete with the Marvel Cinematic Universe, the DC Comic character of Wonder Woman (Gal Godot) was introduced somewhat haphazardly in Batman v Superman: Dawn of Justice (2016), audiences were a little hesitant on how this outstanding character would be handled. When Wonder Woman (2017) came out, all those doubts were put to rest…for a time at least.

The first Wonder Woman film gave audiences a thrilling period piece, set on the backdrop of WWI. Like all good superhero films, it told a human story with superhuman characters. Most all the classic elements Wonder Woman fans had come to expect were present: the costume, the Amazon backstory, even the lasso of truth, everything but the invisible jet was present! Godot gave an outstanding performance that lent real emotion and depth to the character, and even tragedy when Steve Trevor (Chris Pine) sacrifices himself for the mission.

Godot’s Wonder Woman would appear in subsequent forays into the DC Extended Universe, playing an integral part in Justice League (2017), and a second solo film Wonder Woman 1984 (2020), which did meet with a lukewarm reception. This reception could very well have been due to it’s release during the height of the Covid-19 shutdown, but, also speaks to the undercutting of Steve Trevor’s (Pine) sacrifice in the first film, and a film that didn’t quite capture the same spirit as it’s predecessor.

Fans were looking forward to the third installment in the franchise, especially after a tweet from the star of the films, Gal Godot herself expressed excitement about continuing the legacy of the character:

“A few years ago it was announced that I was going to play Wonder Woman. I’ve been so grateful for the opportunity to play such an incredible, iconic character and more than anything I’m grateful for YOU. The fans. Can’t wait to share her next chapter with you🙅🏻‍♀️🙌🏼💃🏻♥️”

A few years ago it was announced that I was going to play Wonder Woman.I’ve been so grateful for the opportunity to play such an incredible, iconic character and more than anything I’m grateful for YOU.The fans.Can’t wait to share her next chapter with you🙅🏻‍♀️🙌🏼💃🏻♥️ pic.twitter.com/XlzhrMx4xe

This excitement, sadly, may have been premature. Just around the same time as this tweet, rumblings from DC Studios were heard that the third installment in the Wonder Woman franchise had been cancelled, along with a reboot of the Justice League entirely! This lead to a huge uptick in activity surrounding the DC Extended Universe (which may well have been the goal), and an official response from DC Studios head, James Gunn telling people not to panic.

The news of Wonder Woman 3‘s cancellation however continues. According to multiple insiders it was not Warner Brothers, nor DC Studios that cancelled the sequel, but rather, Patty Jenkins herself in walking away from the film. These insiders reported that the director met with studio heads, and pitched her treatment for the third film, and was rejected, but encouraged to return with a new script, and new story. Jenkins was reportedly upset with this, telling executives:

As of this moment, Warner Brothers has not shelved the idea of a third Wonder Woman, but it doesn’t seem like Patty Jenkins will be involved with the project if they decide to move forward. With the DC Studio and DC Extended Universe in the spotlight, James Gunn and Peter Safran will need to make some clarification soon, or risk losing the interest and dedication of their fanbase.

What do you think about Patty Jenkins departure? Let us know in the comments below!