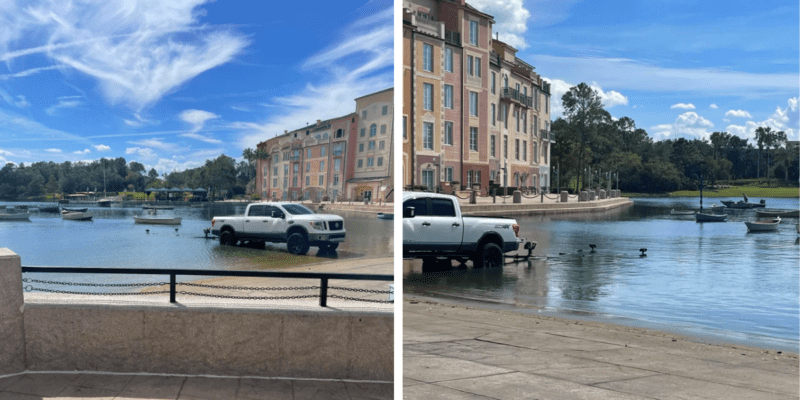 Universal Orlando Resort can’t catch a break when it comes to storm damage.

Last month, Universal Studios Florida and Universal Islands of Adventure faced significant flooding during Hurricane Ian closures, including at The Incredible Hulk Coaster. Jurassic Park River Adventure Ride and Dudley Do-Right’s Ripsaw Falls were both damaged, and the latter has yet to reopen. Halloween Horror Nights was also canceled.

However, it seems one area of Universal Orlando is still recovering from Hurricane Ian. Reddit user u/Quirky-Extent4071 shared photos of a truck doing repairs at Loews Portifino Bay Hotel:

Portifino bay being repaired after IAN… from UniversalOrlando

The truck appears to be pulling debris out of a lake or repairing fixtures and lights. The Guest wrote:

It looked like he was adjusting the spacing on the boats… or maybe making sure the lights on them were glowing for night? I heard some of the lower floors there had flooding and my personal room with a balcony had some wet carpet by the sliding door

Universal Orlando Resort has not confirmed any damage, nor stated if repairs at the Resort were due to Hurricane Ian or Tropical Storm Nicole.

Subtropical Storm Nicole made landfall on Wednesday night as a Category 1 Hurricane before moving inland with tropical storm-force winds. Just over a month ago, Tropical storm turned Hurricane Ian hit the region, surpassing Hurricane Dorian, Hurricane Matthew, and Hurricane Irma as the worst storm to target the area in years.

After the storms this season, have you noticed any damage to Universal Orlando Resort or Walt Disney World Resor?