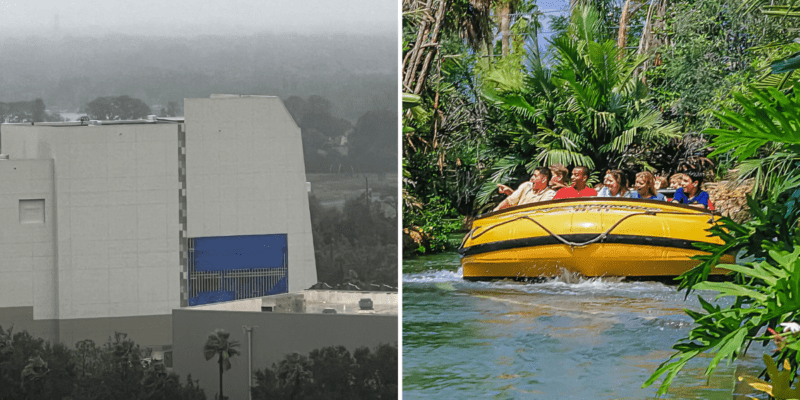 As Universal Orlando Resort gears up to begin its phased reopening, Guests have shared an image showing that one of the Park’s most iconic attractions was severely damaged after Tropical Storm Nicole’s landfall, barely a month after Hurricane Ian struck the attraction.

Jurassic Park River Adventure is one of Universal Orlando’s most popular attractions. Located in Universal’s Islands of Adventure, taking Guests on a journey along with several dinosaurs from the famous franchise. However, it would seem that the Universal attraction, like Jurassic Park, has a serious containment problem, again.

Jurassic Park River Adventure was struck severely by Hurricane Ian in September, during Universal Orlando’s closure, leaving a massive hole in the side of the attraction building. Universal covered the hole with a tarp-like material which was ripped by Tropical Storm Nicole, exposing the initial damage once again.

The image was shared on the Universal Orlando (r/UniversalOrlando) Subreddit by u/Barneby-Jones. You can see the image below or click here to watch it.

Universal officials will surely take action to mend this damage once again, this time with a more permanent solution as hurricane season approaches an end. Inside the Magic will keep you updated as more information becomes available.

Have you visited Universal Studios Florida or Universal’s Islands of Adventure recently? Tell us about your experience in the comments below!