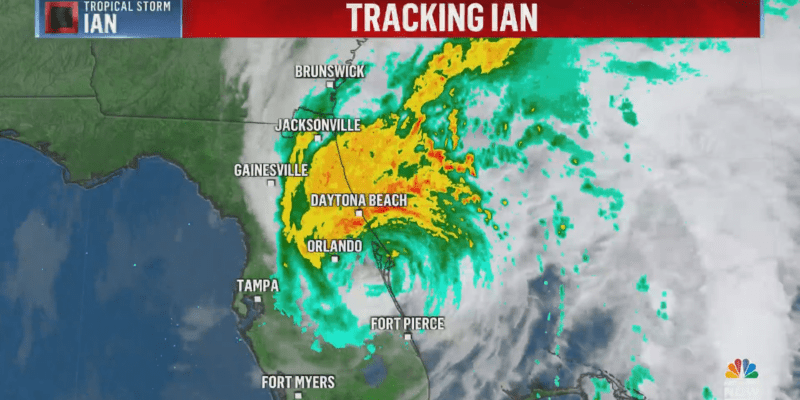 Per the National Hurricane Center, Hurricane Ian has been downgraded to a tropical storm. However, severe weather is still expected in the area.

While over 2.5 million people across Florida lost power starting Wednesday after Hurricane Ian walloped the state as one of the most powerful storms ever to hit the United States, Ian was downgraded to a tropical storm by the National Hurricane Center on Thursday morning.

Ian, now a tropical storm, slammed the southwest coast of Florida as a major hurricane, nearing Category 5, on Wednesday afternoon, bringing life-threatening storm surge and winds of 150 miles per hour, causing widespread devastation and flooding across the state.

The National Hurricane Center stated the following regarding the latest updates for Tropical Storm Ian:

While maximum sustained winds have dropped to about 65 miles per hour, per NBC News, the storm continues to cause destruction as it moves northeast. The storm’s center is expected to move off the east-central coast of Florida later today before approaching the coast of South Carolina on Friday.

Today, September 29, President Joe Biden declared a major disaster in the state of Florida and ordered Federal aid to supplement State, tribal and local recovery efforts in the areas affected by Hurricane Ian beginning on September 23, 2022, and continuing. Per the White House statement:

Assistance can include grants for temporary housing and home repairs, low-cost loans to cover uninsured property losses, and other programs to help individuals and business owners recover from the effects of the disaster.

While Ian’s intensity has decreased, rain and strong winds are still expected in Orlando and the surrounding areas. Orlando International Airport remains closed as every road leading to the airport is flooded. You can read more about the situation at MCO by clicking here.

Inside the Magic will continue to keep you updated on the status of SeaWorld, Universal Orlando, Walt Disney World, and others amid the impact of Tropical Storm Ian.

Comments Off on Hurricane Ian Downgraded to Tropical Storm, Severe Weather to Continue In Florida