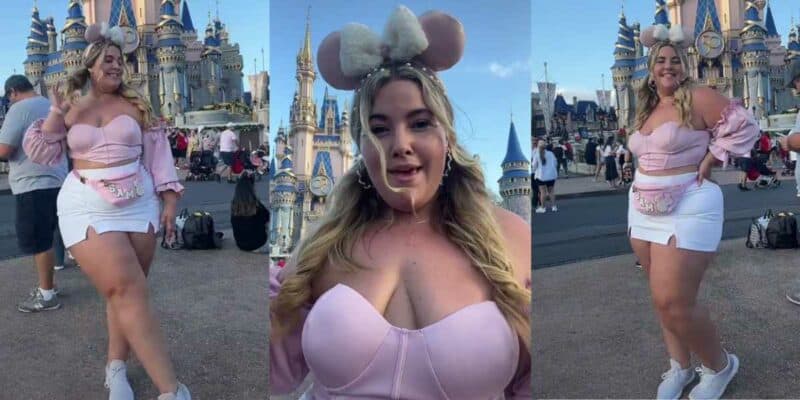 One Guest visiting the Walt Disney World Resort has received hate comments after posting her alleged “inappropriate” outfit on social media. But the creator has fired back at trolls in the now viral series of videos.

Disney Parks are known as a place of expression. Every day, Guests celebrate their Disney love through Minnie Mouse ears, costumes, bounding, and more. Many visitors to The Walt Disney Company’s Resorts will plan and curate their outfits ahead of time: comfort, high fashion, photoshoot-chic, each Guest has their own reason for dressing the way they do while on a Disney vacation. And in this digital age of social media, of Reels and TikToks, some people need the perfect fit for their photos in front of Cinderella Castle, at the purple wall, or while reminiscing the old Future World at Spaceship Earth.

Many love sharing their time at the Disney World theme parks — whether it’s Magic Kingdom, EPCOT, Disney’s Hollywood Studios, or Disney’s Animal Kingdom — on social media, but as with anything on the internet, everything is up for debate, and discussion. As was the case recently when one creator shared a series of videos to the popular social media app, TikTok.

Sam Paige (@sampaigeeee) currently has 3 million followers on TikTok, where she shares dancing, modeling, and lifestyle content. A self-proclaimed advocate for body positivity, Sam has just faced a barrage of criticism over her choice of clothing for a recent trip to The Most Magical Place On Earth — Walt Disney World Resort.

One report captured the responses from Sam Paige’s videos, with many bashing the creator’s outfit choice:

“Why dress so inappropriate when you’re at a theme park for children? That’s an outfit you’d wear at an adult gathering,” one person commented.

Another user commented on a separate video:

NOPE!! Sure show off your beauty, but for the love of science and nothing holy, at the very least cover up your ass; gonna blind them kids.

However, the body-positive TikToker fired back at some of those deeming her Disney Park outfit inappropriate. According to one report, she said:

“I’m wearing a shirt with sleeves and a skort,” she explained, “that’s a skirt that has shorts attached to it.”

“…because it’s on a big body that it’s bothering you […] I’ve seen literal booty cheeks hanging out under shorts, but because I’m fat it’s inappropriate?”

The creator isn’t wrong. The rise of social media “hacks” on places like Instagram and TikTok has seen a number of people dressing against the dress code established by Disney Parks in the hopes to score free merchandise. And it worked for a while, multiple Guests shared their experience of getting a free Disney shirt to “cover up”, but a recent video seemingly suggested that Disney Cast Members had become clued up on the trend and instead began turning Guests away who did not follow the correct dress code.

While some shot down Sam’s look in front of the home to Disney Enchantment, Cinderella Castle, many celebrated the creator’s Disney Princess-inspired outfit.