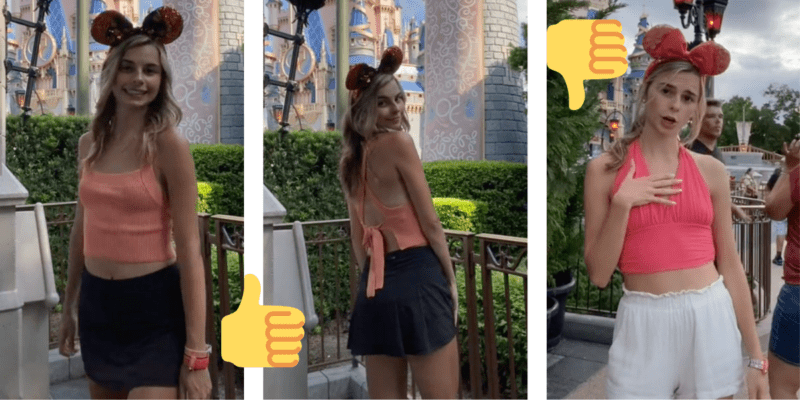 While Disney doesn’t guarantee Guests a free shirt, many Guests who wore clothing that went against Disney’s code reported benefiting from a similar magical moment. However, in May, Guests who didn’t intentionally violate the dress code said that Disney Parks were no longer giving away free shirts. Disney Cast Members confirmed this in the comments of a few dress code TikToks, including one by @erinbill678.

Erin was the second Guest we reported on to confirm the change in Disney’s dress code violation policy. She wore a tie-back shirt to Magic Kingdom in May:

In a follow-up video, Erin clarified that she wasn’t trying to get dress-coded and had repeatedly worn this specific top to the Parks. A Cast Member reportedly told Erin that any top that can become untied isn’t allowed. Erin expressed confusion since ties are not explicitly mentioned in the Walt Disney World dress code, which reads:

However, this week, Erin revisited Magic Kingdom in a similar tie-back top and wasn’t stopped. She shared this video of herself, noting that she didn’t get “dress-coded” by Cast Members:

Other Guests have shamed Disney for not forcing men wearing obscene and vulgar shirts at Disneyland Resort, Disney Springs, and other Disney properties to change, calling it a double standard.

Walt Disney World keeps its definition of “inappropriate” vague, so it’s up to the Cast Members at Park entry’s discretion to decide if clothing meets the dress code requirements. It’s best to choose another clothing item if you’re unsure about your outfit!

Do you think Walt Disney World is inconsistent in policing its dress code?