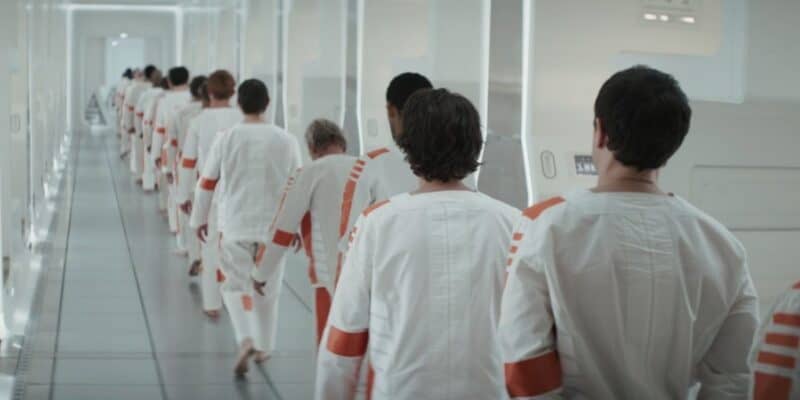 Earlier this year, Walt Disney World Resort opened one of their most costly experiences yet, the Star Wars: Galactic Starcruiser. Promised as a fully-immersive adventure, the 2-night excursion allows Guests to become part of the galaxy far, far away, taking on missions, eating and drinking like a Jedi, and meeting characters like Chewbacca.

Since opening, the Disney hotel has faced constant criticism regarding its cost, with some claiming the Star Wars experience is only there to serve the wealthy. But, a surprising development has happened with some now noticing that the Galactic Starcruiser looks more like a prison than a bourgeois sci-fi hotel thanks to the latest live-action Star Wars show, Tony Gilroy’s Star Wars: Andor.

Star Wars: Galactic Starcruiser sets Guests back around $5,000 per room per voyage for two nights aboard the Halcyon in a standard cabin. Inclusive of the cost are multiple experiences, locations, and activities for the entire family such as the Crown of Corellia Dining Room and Sublight Lounge, as well as training for both lightsabers and the Halcyon’s bridge.

Due to the Chandrila Star Line’s Halcyon starcruiser being nestled between Disney’s Hollywood Studios Theme Park and EPCOT Park, Guests staying at the immersive hotel will also continue their Star Wars adventure by partaking in a visit to Batuu’s Black Spire Outpost at Star Wars: Galaxy’s Edge, meaning a ride on Millennium Falcon: Smuggler’s Run and Star Wars: Rise of the Resistance will be on the cards for most.

While some have celebrated Walt Disney World’s ingenuity to deliver such an immersive product, others have blasted the company for its continuing disconnect between price and experience, with the Starcruiser pricing out a large percentage of the Disney Park’s Guests. And the expense may be causing even more Guests to opt out of the experience as voyage dates for 2023 are pretty empty as we head toward the end of the year.

The lack of bookings paired with the rise in costs across the whole of Walt Disney World Resort including Disney Genie+, admission tickets, and hotels, may mean Walt Disney Company CEO Bob Chapek and Disney Parks Chairman Josh D’Amaro have to reevaluate the cost of the Star Wars: Galactic Starcruiser for the benefit of future Guest experience.

Many more may be put off from a trip on the Halcyon after some Star Wars fans noticed the comparisons between the passenger cabins and the new prison complex, Narkina 5, in Star Wars: Andor. The new Disney+ show follows Diego Luna’s future Rebel spy, Cassian Andor, as he becomes embroiled in the burgeoning Rebel Alliance’s war against the Galactic Empire. In the last few weeks, Andor has found himself arrested and imprisoned in a labor facility, Narkina 5.

And some have just noticed a comparison between one of Disney World’s most expensive rooms, and the prison bunks Andor finds himself sleeping on while carrying out his six-year sentence. As Nick Horowitz (@ztiworoh) pointed out:

I find it very funny that the $5000 Star Wars hotel looks way more reminiscent of the dystopian prison in Andor than anything else in Star Wars pic.twitter.com/ogEH3lzf7F

This isn’t the first time the Star Wars: Galactic Starcruiser has been compared to a correctional facility. Months ago @GumShoeGoof said:

Am I crazy or does this all look like rethemed corrections industry architecture and design… Can you spot the difference? #WaltDisneyWorld #GalacticStarcruiser

Am I crazy or does this all look like rethemed corrections industry architecture and design… Can you spot the difference? #WaltDisneyWorld #GalacticStarcruiser pic.twitter.com/fum6ljicfZ

It is likely a coincidence that Andor has used the same tones as the Halcyon passenger cabins but there is certainly something off about the synergy of how Disney manages the Star Wars franchise — especially when Star Wars has such a dedicated fanbase that notices details like this. In some people’s eyes, the Star Wars: Galactic Starcruiser, despite being a feat of Walt Disney Imagineering, may be seen as a glorified correctional facility as Andor continues to pull more and more eyes each week to the adventures of the Empire and Rebellion.

Do you think the Star Wars: Galactic Starcruiser looks like Andor‘s Narkina 5? Let us know in the comments down below!