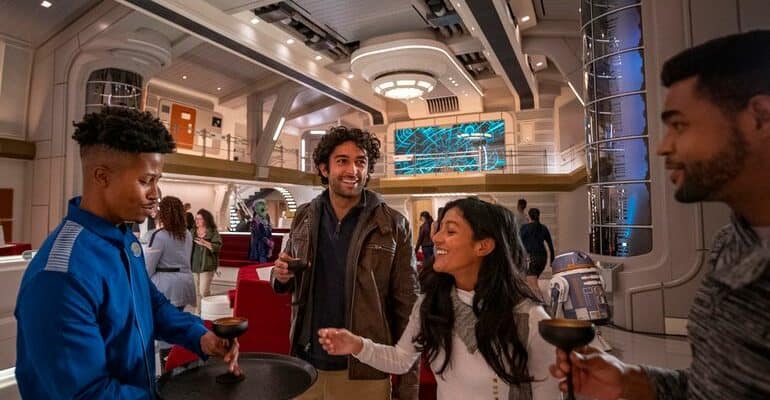 Perhaps one of the biggest additions to the Walt Disney World Resort came in the form of the flashy and incredibly-ambitious Star Wars: Galactic Starcruiser.

Since its initial “launch,” the experience has been praised for its immersion and overall quality, though there are still issues that Disney will continue to iron out. This experience comes at quite a cost, though, so be sure to have your galactic credits ready. The price to fly is nearly $6000 per room, which is a cost that may price even the biggest Star Wars fans out, considering this is only a 2-night adventure. This does, however, include food costs, room, and board, entertainment, a visit to Batuu at Star Wars: Galaxy’s Edge in Disney’s Hollywood Studios, and more.

And to add to the already huge cost, one of the add-on experiences just went up in price.

Along with the creative dining experience on board, the starcruiser also offers Guests a luxurious dining experience in the form of the Captain’s Table. Here, Guests can sit down and get ready for an “especially memorable dining experience.” Guests are promised extra courses, which include the captain’s favorite dishes, all while seated in a prime location in the center of the Crown of Corellia Dining Room.

Of course, this comes at an additional cost, which just so happened to have been hit with a price increase. This was, unfortunately, confirmed in a tweet from reporter Scott Gustin (@ScottGustin) earlier today.

The cost of this “Captain’s Dinner” used to be $30 per Guest, but now it will cost Guests $50 each. While this experience is optional, we still hate to see it be hit with a price bump, something that many have felt is all-too-common at the Disney Parks and Resorts as of late.

Star Wars: Galactic Starcruiser connects with Disney’s Hollywood Studios’ Galaxy’s Edge, adding another level of immersion to the out-of-this-world experience. The Star Wars-themed land is set between Star Wars: Episode VIII – The Last Jedi (2017) and Star Wars: Episode IX – The Rise of Skywalker (2019) in the Star Wars timeline. Guests will be able to visit Batuu and ride Millennium Falcon: Smugglers Run and Rise of the Resistance.

Have you stayed aboard Disney’s Star Wars: Galactic Starcruiser yet?