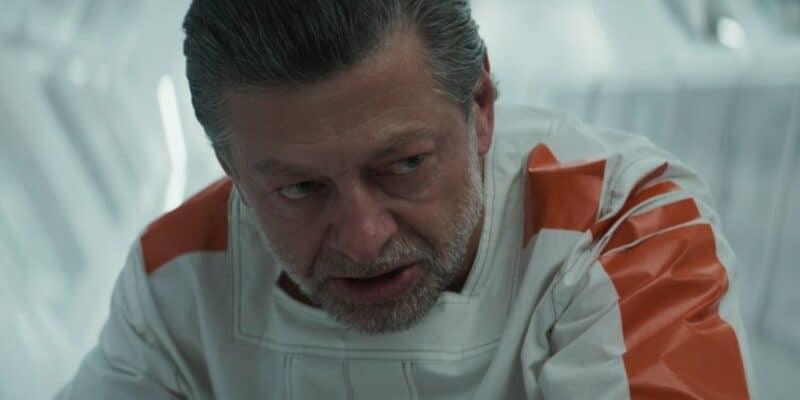 That line, spoken by Andy Serkis’ Kino Loy, closes this week’s episode of Star Wars: Andor with a rush of adrenaline. It comes after an episode in which Cassian Andor (Diego Luna) has spent days trying to convince Kino that they need to escape, that the prison system they are trapped within on Narkina 5 is designed to hold them there until the Empire no longer needs them.

It takes the death of fellow teammate and prisoner Ulaf (Christopher Fairbank) suffers one of the most shocking deaths in all of Star Wars. He isn’t shot, sliced in half by a lightsaber, or blasted into space. He suffers a stroke, brought on by months of relentless work and stress, unrecognized by overseers who do not care and fellow inmates who are driven by a need to keep their feet off the electric floor. This is a new Star Wars story, one in which the heroes are recognisably frail.

The Med Tech who arrives to treat him euthanizes him instead. In the process, he confesses the truth about Narkina 5. No one ever escapes; instead, they are reassigned to a different floor, and a different team — cycled back into the production line. It’s a secret the Empire wants to keep so desperately, it wiped out an entire floor of 100 prisoners to keep it after a mistake led to one of the inmates re-entering the general population.

Cassian, on some level, knew they were doomed already. It’s why he’s been working towards an escape, filing away at machinery hidden within the wall, noticing weaknesses in their electrical enforcement system. But he was missing key information that only an inmate of experience, of standing like Kino’s supervisor, could help with.

And now he has, leading us right into what seems to be a prison escape next episode. Ulaf’s death has shattered the delusion from Kino’s eyes. He seems set to help Cassian on his mission to break free. And that final line is delivered with such significance, such resolve, that it carries the weight of everything the prisoners have endured so far with it.

Tonight’s #Andor  is another banger. Tension upon tension. Conflict upon conflict. Intrigue upon intrigue. Everyone on the show, top to bottom, firing on all cylinders. The whole prison thing is just *chef’s kiss* and I can’t wait to see where it goes after that last line.

Tonight's #Andor is another banger. Tension upon tension. Conflict upon conflict. Intrigue upon intrigue. Everyone on the show, top to bottom, firing on all cylinders. The whole prison thing is just *chef's kiss* and I can't wait to see where it goes after that last line. pic.twitter.com/b2Q0Zz9Zb7

What did you think of the ending of Andor Episode 9? Tell us in the comments below.
Andor (2022) is currently streaming on Disney+. Led by showrunner Tony Gilroy, it stars Diego Luna as Cassian Andor, Genevieve O’Reilly as Mon Mothma, Stellan Skarsgård as Luthen Rael, Fiona Shaw as Maarva Andor, Denise Gough as Dedra Meero, Kyle Soller as Syril Karn and Adria Arjona as Bix Calleen. Set before the events of Rogue One, in the years prior to Princess Leia’s fateful capture by Darth Vader, it follows the formation of the Rebel Alliance in the ever-expanding Star Wars universe.