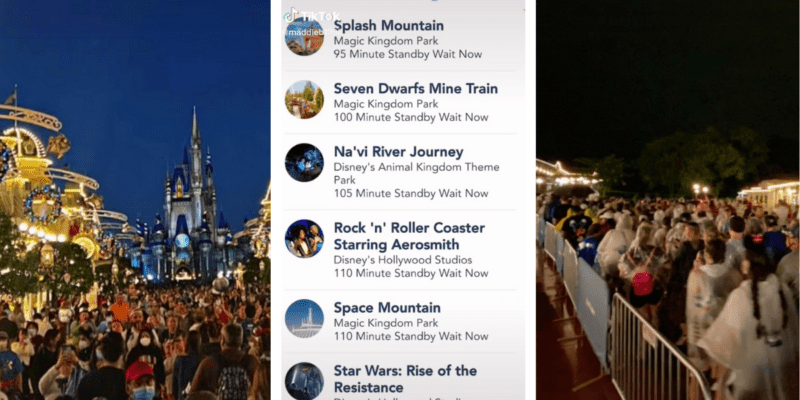 What could be better than The Most Magical Place on Earth at the Most Wonderful Time of the Year? Whether you’re headed to EPCOT for the International Festival of the Holidays and the Candlelight Processional or spending the night at Mickey’s Very Merry Christmas Party, you’re sure to enjoy festive offerings at Walt Disney World Resort this holiday season.

Each year, the Disney Parks boast the overnight transformation from Halloween to Christmas on November 1. This year was no different, but one Disney Cast Member aims to share a different perspective on the holidays at Walt Disney World Resort.

In a video shared on TikTok,  Maddie (@maddieb1998) followed a trend of Disney Parks fans sharing their favorite parts of the holidays at Walt Disney World and Disneyland Resort:

♬ Underneath the Tree – Kelly Clarkson

But instead of sharing magical Disney Christmas memories, Maddie shared photos of bustling crowds, wait times over 100 minutes, and the My Disney Experience app showing no available dining reservations.

Related: Despite Price Complaints, Disney’s Very Merriest After Hours Is Selling Out

“‘Tis the season 😍,” Maddie wrote sarcastically. She also explained that she saw wait times of up to four hours at Rock ‘n’ Rollercoaster during the holidays.

Many Disney Parks fans and fellow Cast Members commiserated with Maddie in her comments section. “Girlll don’t remind me lol I be working Navi river journey,” one wrote.

“As a cast member, I can confidently say that it’s already getting like this 😳,” another said.

“🤣🤣🤣 Why I will never go for Christmas,” said one Disney Parks fan.

Whenever you visit Walt Disney World Resort, you’re sure to have a magical vacation!

Have you ever been to Walt Disney World Resort during the holiday season?