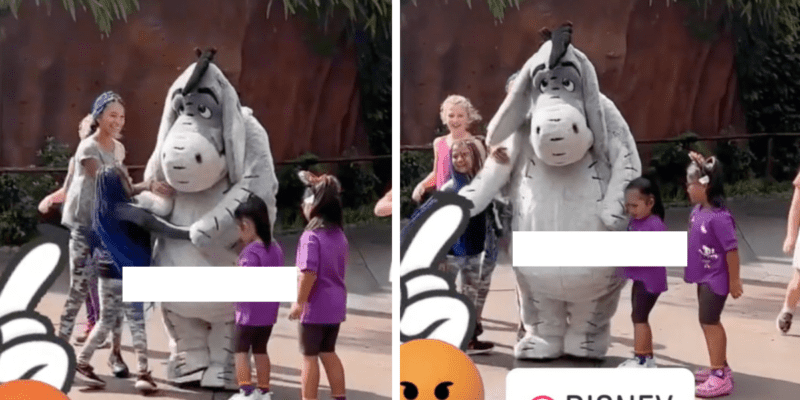 The Disney Parks are again accused of racism and preferential treatment online after a Disney character hugged white children and then shoved a young Black girl aside at Disneyland Resort.

TikTok account @karenlivesmatter2019 shared the video, tagging Disney and demanding they take action. It’s not clear when the video was actually filmed at Disneyland Resort:

“Disney must have hired a Karen,” a voiceover says over the video. “Watch closely what they do.”

In the video, Eeyore walks through the Disney Park alone, with no character attendant or entertainment Cast Member in sight. Children swarm the character, and he hugs a few of them, who happen to be white. As he continues walking, a young Black child tries to hug him, and he shoves her aside. It’s uncertain if this was intentional or if the Character Performer could not see the child through the Eeyore costume.

Commenters were split. “Why do they keep doing this to kids,” @909johnnysokko wrote.

“You know they have places to go to you know, they probably had to go to a meet and greet at the other side of the park and doesn’t have time to stop,” @professionalidiot72 argued.

This accusation comes just months after a lawsuit was filed against Sesame Place San Diego by a Black family who went viral for sharing a video of a Sesame Street character ignoring their child despite greeting other white children. Though the Theme Park said the incident was a mistake, dozens of videos surfaced of Sesame Place characters giving white children preferential treatment. Fans were outraged.

This incident spurred a movement on social media, with multiple Theme Parks being targeted, including Disneyland and Walt Disney World Resort. One family claimed that Rapunzel ignored their Black child in favor of white children at Disneyland Resort.

Disneyland Resort hasn’t responded to the allegations of racism by this Eeyore performer.

What do you think happened in this video?