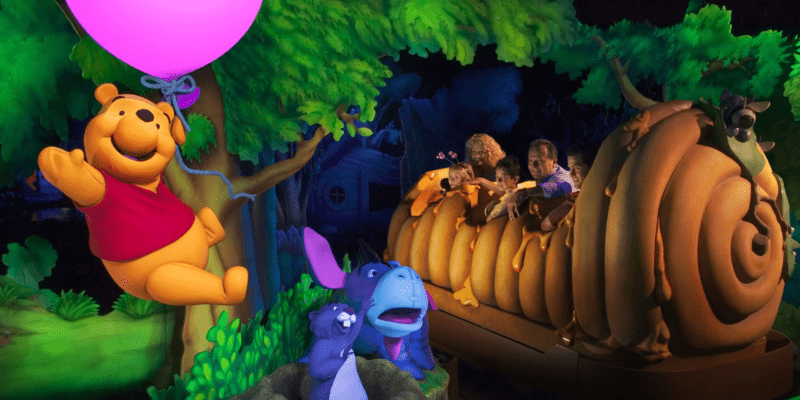 Dozens of Guests were stuck at a beloved Disney attraction, waiting to be evacuated. “At least it wasn’t a thrill ride,” said one Guest.

Disneyland Resort is home to some of the most popular attractions in the world, including Peter Pan’s Flight, The Haunted Mansion, Pirates of the Caribbean, Splash Mountain, Space Mountain, Radiator Springs Racers, and Star Wars: Rise of the Resistance, to name a few. While these attractions will often welcome thousands of Guests a day with no problems, it would appear that ride breakdowns continue to be a growing issue at the California theme park.

One Guest recently shared her experience while stuck on a beloved Disney attraction inspired by her favorite childhood Disney character.

Paulina Cuevas (@iampaulinacuevas) shared a video on TikTok commenting she was happily recording her ride through The Many Adventures of Winnie the Pooh, located in Critter Country at Disneyland Park; which happens to be her favorite Disney character growing up. Paulina surely could record the entire ride, but by the end of the attraction, her vehicle suddenly stopped, leaving her and a large group of Guests stuck in the attraction.

Cast Members assisted with the evacuation, getting every Guest safely off the vehicles, guiding them through the final part of the attraction, and escorting them through the ride’s exit. Paulina commented she was sad after not being able to see the last section of the ride, but, as any of us would, she tried to feel better with a bit of shopping therapy at Pooh Corner in Critter Country.

You can see Paulina’s video below or click here to watch it.

While Disneyland Resort is the Happiest Place on Earth, many Guests think that the California theme park is slowly losing its pixie dust. Between price increases and the Park’s reservation system, Disneyland seems to be losing its appeal for many fans. In addition, there have been several complaints about the Park’s cleanliness, with comments about the presence of different critters throughout the Parks, including cockroaches, spiders, and even rats, and the malfunctions and evacuations that appear more frequent each time at several Disneyland attractions like Indiana Jones Adventure and Splash Mountain.

Have you visited Disneyland Resort recently? What was your experience like? Let us know in the comments below!

Comments Off on Dozens of Guests Stuck on Beloved Disney Attraction, “At Least It Wasn’t a Thrill Ride”