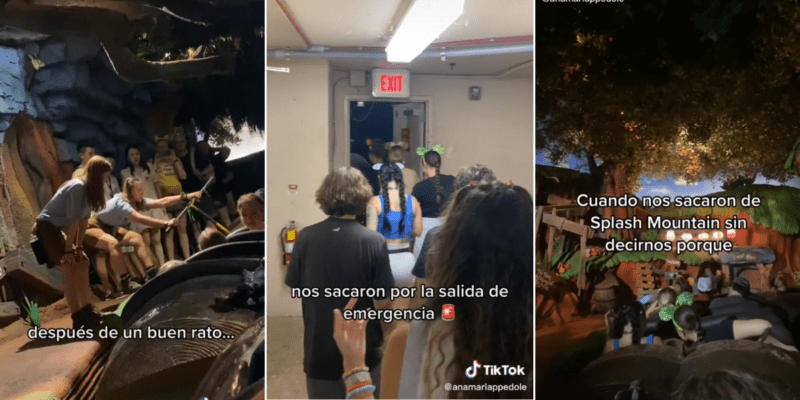 Splash Mountain remains one of Disney’s most troubled attractions, as yet another breakdown caused a massive evacuation ahead of the attraction’s polemic retheming.

Splash Mountain has recently been in the eye of the storm due to its upcoming retheming inspired by The Princess and the Frog (2009), the history behind it, the current condition of the attraction — with broken animatronics, sinking boats, and constant breakdowns — and many other factors that make Guests deem the attraction in “depressingly sorry” condition. The Briar Patch can’t seem to catch a break, as recently another breakdown was reported, causing dozens of Guests to be evacuated halfway through the ride.

Guest @anamariappedole shared a video of her experience on TikTok, commenting that she and a large group of Guests were recently evacuated from Splash Mountain in Magic Kingdom at Walt Disney World Resort without an explanation from Cast Members. She commented that Guests were stuck listening to “Ev’rybody Has a Laughing Place” over and over again as they waited for Disney World Cast Members to come and rescue them.

After “a good while,” all the boats were evacuated before the ride’s second drop, leading to the Laughing Place. Guests were evacuated through the emergency exit, walking down a flight of stairs heading into the Park’s backstage. The original poster commented she and other Guests affected by the breakdown were given small bottles of water, and a Lightning Lane pass to another attraction.

While the original poster did not share any further comment on the evacuation, seeing Splash Mountain have so many problems recently concerns many fans of the beloved attraction and makes many of us wonder if the complete retheming that is coming for the attraction will sort all the issues that can be seen at the time.

Splash Mountain will undergo a complete reimagining very soon, with Br’er Rabbit, Br’er Bear, Br’er Fox, and all the residents of the Briar Patch biding Guests farewell at both Disneyland Resort and Walt Disney World Resort to welcome Princess Tiana, Prince Naveen, Louis, and Mama Odie in a completely new adventure opening at both Orlando and California in late 2024.

Have you been to Splash Mountain at Walt Disney World or Disneyland lately? Are you excited about the retheming of the attraction? Let us know in the comments below!