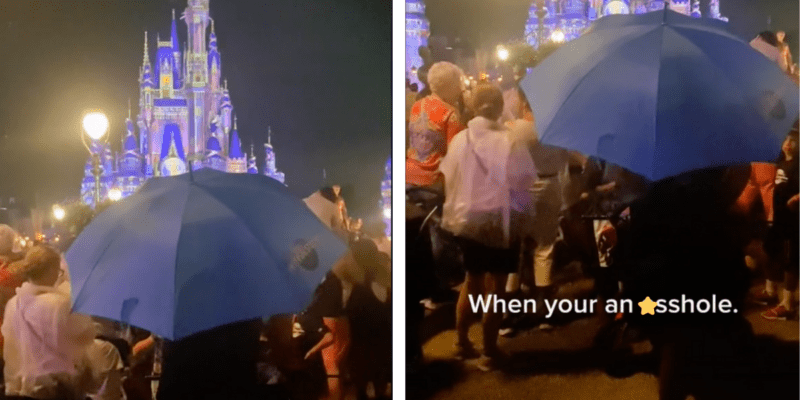 Unfortunately, the Magic Kingdom fireworks were less than magical for some Guests this week. TikTok user @gracehair17 shared this video from Main Street, U.S.A.:

It wasn’t raining, which only frustrated Grace and other Guests more. Commenters joked that to top it all off, the Guest was using a Universal Orlando Resort umbrella at Walt Disney World Resort.

Disney Enchantment (presented by Pandora) replaced Happily Ever After as Magic Kingdom’s official nighttime spectacular for Walt Disney World Resort’s 50th Anniversary in 2021. Fans were underwhelmed with the show, leading the Disney Park to add Walt Disney to the show nearly a year after it premiered. Some fans speculate that Happily Ever After will return after Disney Enchantment ends in 2023, with an announcement expected at D23 this weekend. From Disney:

Behold a brand-new nighttime fireworks spectacular that empowers you to believe in yourself and in magic.

Do you think the Guest should have lowered their umbrella?