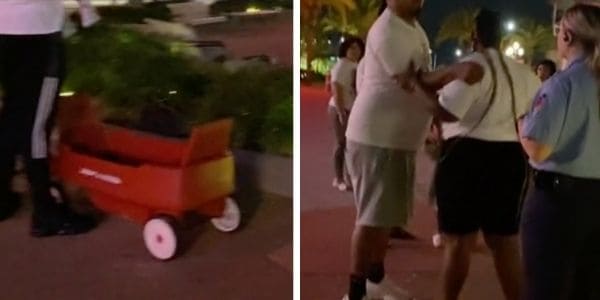 An intense and heated altercation took place recently between Guests who claimed another group of Guests stole their wagon.

Even at “The Most Magical Place on Earth” tensions can run high and fights can break out. When visiting the Walt Disney World Resort, you tend to picture the perfect vacation for all ages. From rides and attractions to shows and restaurants, there are so many great opportunities to have fun at Disney World.

Disney is also home to Disney Springs, a huge shopping center where Guests can literally shop til they drop. With all of these experiences and amenities, it’s hard to imagine things going wrong, but sometimes tensions can run high, resulting in fights.

A troubling situation was recently captured and uploaded to TikTok by Guests who claimed other Guests swiped their wagon from them while visiting Disney Springs. User @animalale shared their story in three parts which you can see below. Please note some of the language is explicit, viewer discretion is advised.

I WAS ROBBED, AND I CANT BELIEVE THEY ARE THE ONES WHO DID IT😱!!!#viralvideo #disneysprings #fyp @ohh.ashely@faithtrust.darling @angelheart406 @thatbadgergal@liliageorgina0 @user457344

The alleged victim went into further detail with a second video.

And finally, as one can see below, a third video was shared regarding the incident.

As you can see in the videos, the Guests were visiting Disney Springs the other night when allegedly another group of Guests wiped their wagon from them. Throughout the night, the Guests followed the supposed thieves until they ultimately contacted a Cast member to assist them in confronting the other Guests.

Once this happened, a verbal fight broke out involving yelling and foul language between the two parties. Eventually, the Guests got the wagon back, but the alleged thieves did not own up to actually stealing it. This is not the first time we have seen fights break out or robberies occur at the Disney Resort. It should be noted that Guests should report any illegal activity they encounter at Disney, and in cases like this, contacting a Cast Member is the right course of action.