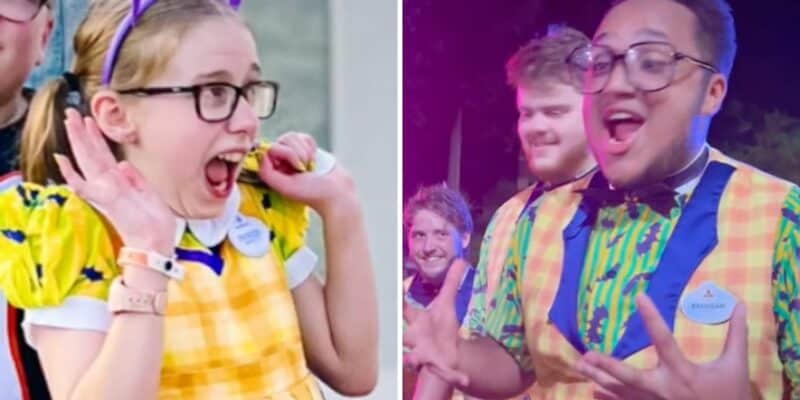 TikToker Makingmainstreet posted another viral video this week, this time sharing the moment that her family’s Disney Halloween tradition stopped Cast Members in their tracks.

When we first reported on the popular Disney lifestyle account, it was to share a video in which Makingmainstreet’s daughter sang “Happily Ever After” in hopes of reaching singer and Disney star Jordan Fisher. The viral video reached Fisher in less than a week.

“Oh my god,” Jordan Fisher commented on the original video from his verified TikTok account. “I love her.”

Now, Makingmainstreet’s family has caught the eye of Disney Cast Members in a completely different but equally heartwarming way.

The family recently visited Walt Disney World’s Magic Kingdom in costume to celebrate the Halloween season at the Disney Parks. While costumes are usually prohibited at the Parks for safety purposes for those Guests who are 14 years of age or older, Halloween is the one time of year in which costumes are not only allowed for all ages, but celebrated.

In a TikTok video that has almost a million views in 3 days, Makingmainstreet’s children approached some unsuspecting Cast Members dressed just like them.

“My favorite Disney Halloween moment so far!” Makingmainstreet captioned the video. “We dress like the real magic makers, yall!”

When the “real magic makers” spotted the costumes, one of the Cast Members screamed in excitement.

“Oh! That is the cutest thing I’ve ever seen!” the Cast Member said, clutching his chest and flagging down his coworkers to show them their Halloween homage. The kids were given sheets of Disney stickers as more than a dozen Cast Members surrounded them to pose for a photo.

“That is the reaction of a person who loves making the magic happen,” commenter Holly Gladfelter wrote in response to the interaction.

A former Disneyland Cast Member also weighed on the clip in the comment section, sharing their thoughts on why the Cast Members were so excited to see Guests dressed in their outfits.

Makingmainstreet shared that this is a tradition that her family does every year to recognize those responsible for making “the real magic” at the Disney Parks.

The entire video of the sweet exchange can be viewed below, or by clicking here.

The costume guidelines according to Disney’s official website read as follows.

We suggest you dress comfortably, wear good walking shoes and check the local weather report before you leave for the parks at Walt Disney World Resort.

Please note the specific costume guidelines for these 2 events:

Mickey’s Not-So-Scary Halloween Party
Disney Villains After Hours
While we encourage creativity, we also value safety and good judgment. If you’re planning to attend these special events, take a moment to read over our latest rules and regulations:

Costumes and some costume masks may be worn; masks must provide unobstructed peripheral vision at all times with openings that allow the eyes to be fully seen.

For Guests 14 Years of Age or Older:
Costumes may be worn according to these guidelines. Guests who do not adhere to these guidelines may be refused entry into, and/or removed from Disney parks, unless his or her costume can be modified to meet the above standards:
All Guests may dress as their favorite character, but may not pose for pictures or sign autographs for other Guests.
Costumes must be family-friendly and may not be obstructive, offensive, objectionable or violent.
Costumes may not contain any props or accessories that resemble or could easily be mistaken for an actual weapon.
Costumes may not contain sharp objects, pointed objects or materials that may accidentally strike another Guest.
Layered costumes or costume props that surround the entire body are strongly discouraged and may be subject to additional security screening.
Costumes may not reach or drag on the ground. (for example, full-length Princess dresses)
Capes may be worn if the length does not go below the waist.
Themed T-shirts, blouses, sweatshirts and hats are acceptable.
Acceptable accessories include: transparent wings, plastic light sabers, toy swords and tutus. Costume headwear may be worn as long as it does not cover the face.
Costume masks of any kind may not be worn.

Do you have a favorite Disney Parks Halloween costume? Share yours in the comments below!