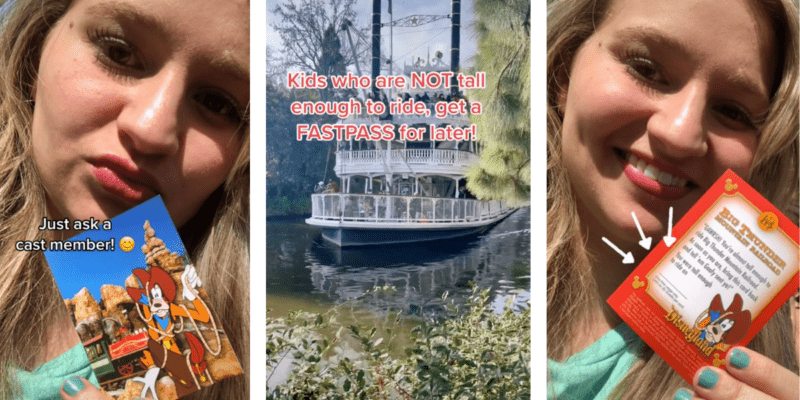 Being too short for a ride can put a damper on kids’ Disneyland Resort vacations. Even though height requirements are there for a reason, it’s tough to explain to little ones why they’re not allowed on Space Mountain or Incredicoaster!

Related: Upset Guest Says Disney Has Cut Too Much, Asks “Where’s the Magic?”

According to Alexa Erekson (@themeparkauthor), Cast Members have a unique way to cheer kids up after they’re denied entry to a ride. Erekson shared this “Disneyland Tip” on TikTok:

“Kids who are not tall enough to ride some of the rides at Disneyland can get a FastPass to get to the front of the line for when they are tall enough,” Erekson explains in the video. She shows a Goofy-themed Big Thunder Mountain Railroad FastPass given to one of her kids.

Erekson added text to the video reading, “Just ask a Cast Member!” Though it seems like a harmless Disneyland tip for other parents, many commenters and Cast Members took issue with this “hack.”

“Please don’t just go up and ask for this. This a thing for cast to make magic,” Kathryn Piworski wrote. “Not every ride will have it.”

“Great another thing Disney is gonna stop because it’s now gonna be a “hack” instead of a magical moment,” @oregonbabey said. “Everything that was a magical moment that got popular online was discontinued so unfortunately this probably will too.”

Kiki (@mittenpanda) works in attractions at Disneyland Resort and said Erekson should repost the video without the note telling others to ask Cast Members for the FastPasses:

“I’m begging you take off that note asking for the pass. This is something we’re barely even allowed to give out as it is.”

Erekson responded that she wasn’t sure what Kiki meant, and another commenter accused her of feigning ignorance. “You clearly know what they mean,” @ashpatronus argued. “Be mindful of sharing with your audience about things for views.”

One former Walt Disney World Resort Cast Member shared a positive memory of the FastPasses. @alltimehxstlxr said she made a “magical moment” for a little girl that was too short for Slinky Dog Dash at Disney’s Hollywood Studios:

“The mom cried and said this is why they go to Disney and I made their vacation. I was miserable working there but that’s a fond memory that’s made working there all worth it in that moment.”

Do you think it’s appropriate to ask Cast Members for this “Disneyland Hack?”