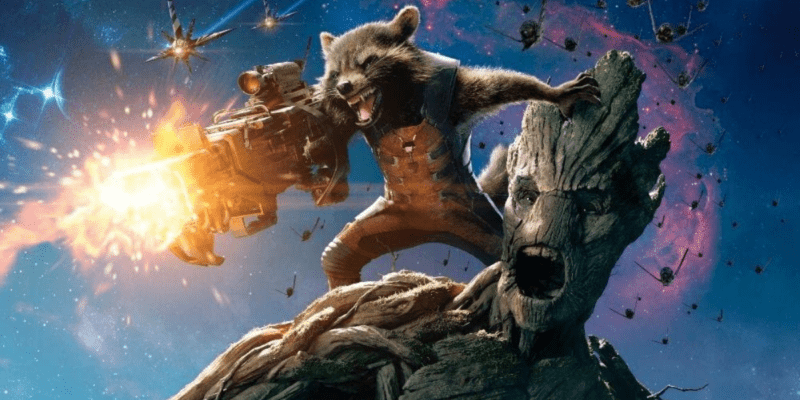 Over in Disneyland Resort’s Disney California Adventure Park (DCA) in Anaheim, California, Guests riding Pixar’s The Incredibles (2004) themed steel roller coaster, the Incredicoaster, were in for a surprise when the Marvel Cinematic Universe’s Rocket Raccoon, Bradley Cooper turned up out of the blue.

The story arose in a Reddit thread discussing Disney fans’ and Guests’ trips to the Disney Parks and Resorts, as users shared their experiences encountering celebrities at the theme parks.

Reddit user nicthesurfer shared the following story, meeting Rocket Raccoon AKA Bradley Cooper — and getting their coveted front row seat stolen from right under their nose:

I sat behind Bradley Cooper on Incredicoaster and got a ride pic with him! He came in through the side entrance and took what was supposed to be my front row seat, but I’m definitely not complaining.

u/nicthesurfer recounted further, almost lamenting the Guardians of the Galaxy star (and his persistently photogenic appearance):

Once the ride ended, the workers asked if he wanted to ride again, so he asked the kid he was there with (girlfriend’s daughter or something) and they went again. Didn’t interact with him, but I’m pretty jealous at how camera ready he looks even on a rollercoaster.

Who is Bradley Cooper’s Rocket Raccoon?

Cooper’s Rocket Raccoon is the adorably fluffy, but definitely not-to-be-trifled-with, gun-toting companion of the galaxy-traversing band of outlaws and superheroes, the Guardians of the Galaxy.

The first Guardians movie, the eponymous Guardians of the Galaxy (2014) premiered in 2014, directed by James Gunn, and starring Chris Pratt as Peter Quill AKA Star-Lord, Zoe Saldaña as Thanos’ favorite daughter Gamora, Karen Gillan as sister Nebula, Dave Bautista as Drax the Destroyer, Vin Diesel as tree-like Groot, and of course, Bradley Cooper as Rocket Raccoon — to surprising success.

Guardians revamped the style of and set the tone for future Marvel Cinematic Universe projects, using fun ’60s and ’70s-heavy soundtracks in contrast with more violent action — to great effect.

Cooper’s Rocket Raccoon played a big role in selling that fun, diverse band of Guardians, with the genetically enhanced raccoon creature acting as the wise-cracking, opportunistic foil to the more self-sacrificing Groot, and even to some extent, main protagonist Star-Lord.

What is the Incredicoaster?

The only Disneyland Resort coaster with a (rather intense) inversion, the Incredicoaster used to go by the name California Screamin’. It opened to the public back in 2001 and stayed as Screamin’ — until a somewhat recent retheme by the Disneyland Resort caused it to undergo several (not all that big) changes. In order to fit the theme of the 2004 superhero-centric hit The Incredibles, the Walt Disney Company, in a wider effort to rebrand that section of the Park from Paradise Pier to more IP-heavy, Pixar Pier.

The Supers Are Back
Baby Jack-Jack’s superpowers are causing chaos as he teleports from tunnel to tunnel, and The Incredibles sprint into action to save the day. Buckle up for an exhilarating ride around Pixar Pier!

Many Guests have been meeting celebrities at the Disney Parks recently, even experiencing disruptions (and not being all too happy about their vacation interruptions) as a sudden influx of stars descend upon the Parks this summer — even shutting down entire rides, Bezos-style.

What do you think about the way celebrities are treated at Disney? Share your thoughts in the comments below!