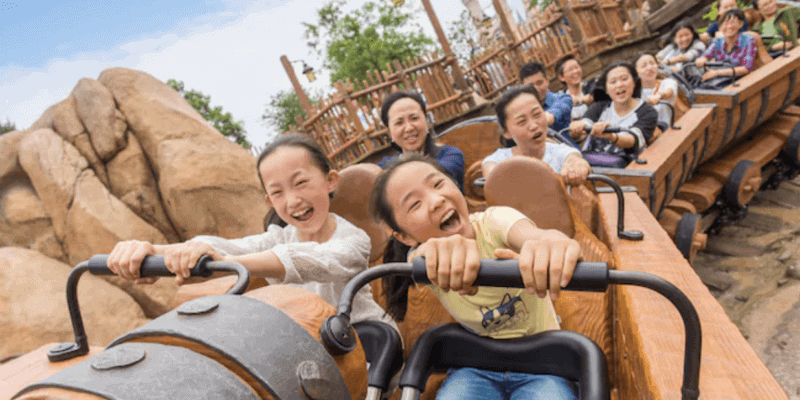 We all remember it from our childhoods. You’re so excited to ride a rollercoaster; you run up to the height stick… but you’re just an inch too short this time!

This is a disappointing experience for all Disney Park Guests. Disney Cast Members hate telling little ones “no” as much as their hearts break hearing it. But for the safety of all Guests, Disney must uphold strict height requirements.

Sometimes, though, depending on the time of day, shoes, etc., children are tall enough to ride one day and just too short the next! That can be an incredibly frustrating and time-consuming experience on an already short Walt Disney World Resort vacation.

So, at Dollywood in the front of the park you can get your kids officially measured and they’ll get wrist bands with a corresponding color of which rides they can ride.

Instead of having different cast members measure kids at every ride at the front and sometimes at the end of the line, it makes more sense to have them officially measured just once and then this information is stored in the magic band. When they scan to enter the ride, it’ll read whether they meet the height requirements.

Other fans were quick to point out potential issues with this idea. At Dollywood, the wristbands are tight enough that they can’t be switched without breaking. MagicBands, however, can easily be swapped. u/Worried_Thylacine noted that it would be easy for families to swap bands so that kids could ride Disney Park attractions that they’re too short for.

u/americanpeony said that this would take so much time at Park Entry that it would negate the time saved in attraction queues:

“My only issue with this (which is a good idea in general) is how much more waiting this would mean for the families with kids and/or everyone depending on what the logistics would be. Disney lines are so long already and rope drop is everything when it comes to getting your day planned and done efficiently.”

Some fans said it would save kids a lot of heartbreak. u/AndISayYeahx13 said:

“This is pretty brilliant – we went a few years ago and my son was right at 40” tall. He got to ride Mission: Space Green and Star Tours without issue, but when we went to Soarin’, he was told he was too short. Despite my protests, he still wasn’t allowed on – meanwhile the cast member was so focused on measuring my son (who was three and still squirmy), she let at least three other kids go by that should have been measured. This would surely save a lot of headache and frustration for both guests and CMs.”

“I’ve seen kids who were measured at the front of the line, waited the whole time, and then the cast member at the end of the line overrule it,” u/homeawayfromhogwarts replied. “So much time wasted for the poor kid.”

However, u/Pook242 said that despite the heartbreak it might cause, it’s a good thing that multiple Disney Cast Members measure kids who are on the cusp of being too short for a ride:

“If whoever is operating the ride does not want you on (for whatever reason but let’s say height) then their ruling trumps all, as they are in charge and liable for the safety of everyone on that ride.”

Would you support an official height requirement system linked to MagicBands or paper wristbands?