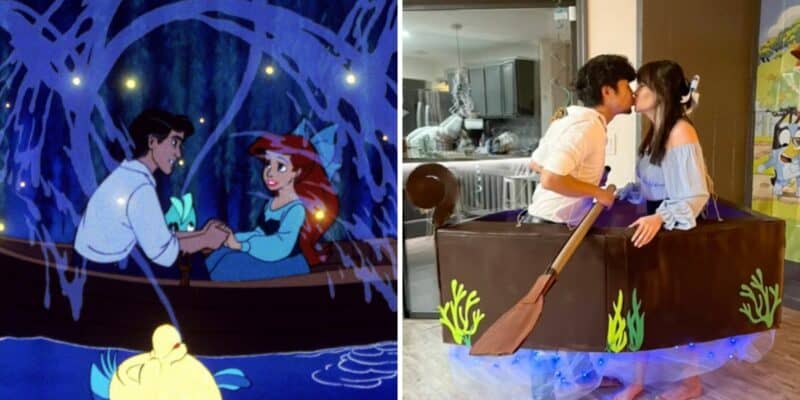 Disney movies have been the inspiration for countless fan costumes over the years. From themed parties to Halloween events to photoshoots and beyond, Disney films contain almost 100 years’ worth of amazing characters for enthusiasts to try and emulate.

But for a pair of fans tasked with creating their own Disney looks for a birthday celebration, the costume alone wasn’t enough to capture the essence of one beloved classic. And so, TikToker Marie Gomez Hom and her boyfriend recreated an entire scene from Disney’s The Little Mermaid (1989).

The official synopsis for the Disney classic reads:

With unforgettable characters, thrilling adventures, soaring Academy Award®-winning music (1989: Best Music, Original Score, and Best Music, Original Song, “Under The Sea”), The Little Mermaid is one of the most celebrated animated films of all time. Venture under the sea where Ariel, a free-spirited mermaid princess, longs to be part of the human world. After bravely striking a bargain with Ursula, a sneaky sea witch, Ariel embarks on the adventure of a lifetime. With Flounder and Sebastian at her side, Ariel will need all of her courage and determination to make things right in both her worlds.

As for the costume, The Little Mermaid lovers sought to replicate the movie’s infamous “Kiss the Girl” scene, which fans likely remember from the film itself or from the popular Walt Disney World attraction Under the Sea ~ Journey of The Little Mermaid.

Both visuals feature Prince Eric in his traditional white collared shirt and a two-legged Ariel in her blue dress and giant bow. The pair are seated in a boat surrounded by a romantic ambiance created by land and sea creatures who team up to encourage Eric to “Kiss the Girl.” The scene has been iconic since the film’s release more than 30 years ago.

For their replica, Marie Gomez Hom and her boyfriend crafted an entire ship down to the oars out of spray-painted cardboard. They even included some faux seaweed and lit-up tulle to incorporate the ocean in their wearable watercraft.

With the addition of twine shoulder straps and the characters’ signature looks, the impressive “Kiss the Girl” recreation was complete.

Watch their TikTok video below to see the process of their Disney movie costume project. The video can also be viewed by clicking here.

More on Under the Sea ~ Journey of The Little Mermaid

A Song-Filled Shell-abration
Revisit the classic “tail” of how one lucky little mermaid found true love… and legs.

Do you have a favorite Disney movie costume? Let us know in the comments below!