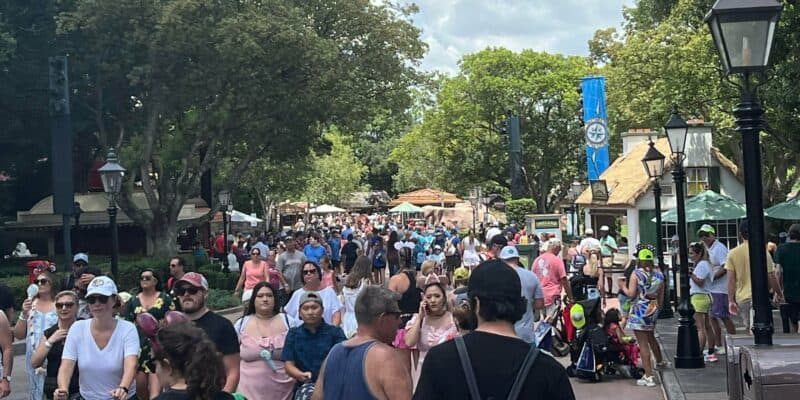 While questions are mounting about the state of the Annual Passholder program in the United States Disney Parks. Walt Disney World Resort has revealed they will be bringing back one offering from earlier this year.

With so much going on, from EPCOT’s newest attraction Guardians of the Galaxy: Cosmic Rewind, the 50th anniversary celebration, and the constant commentary on Disney Genie+ and Lightning Lane – the latter gaining a level of notoriety quicker than many of the new questionable innovations at the Disney Parks, Disney World theme parks visitors are contending with crowds, lines, technology, and experiences like never before.

Related: All Disneyland Magic Keys Sell Out, Future of AP Program Up In the Air

The Walt Disney World Resort, like Disneyland Resort in Anaheim, Southern California, utilizes a Park Pass reservation system alongside its ticket purchases and Annual Passholder usage. Despite Annual Passholders being offered multiple perks and exclusive merchandise and experiences, contention has grown in recent months on both coasts as Disneyland’s Magic Key came under fire from Guests, and Disney World suspended Passholder sales.

But, amid this discontent, Walt Disney World Annual Passholders will soon be able to access a perk that previously debuted this year – the celebratory Mickey Mouse and Minnie Mouse 50th anniversary magnet. Where before this perk could be found in Disney Springs, this time the magnet will be located in Creations in EPCOT at the Central Florida Disney Resort.

The loyalty of Disney World’s Annual Passholders, and the almost legendary and mythical nature of exclusive Disney Parks merchandise, caused the virtual queue to stretch past four hours when the magnet was last released earlier on in The World’s Most Magical Celebration.

This time, though, there will be no virtual queue for the item and the magnet will be available for Guest pick up from August 25 through September 21 at Creations. If you missed out last time, then this is the next – and perhaps, last – chance to grab the limited edition magnet at the Disney Park. Details can be found in the My Disney Experience app as seen above.

It must be remembered that in order to pick up the Annual Passholder item, a valid Park Pass must also be made for EPCOT to visit prior to 2 p.m., after that Park Hopper hours will open.

News is expected regarding the state and future of Annual Passes across the domestic Disney Parks. The Magic Key program has come under intense backlash as Guests’ Passes expire before a renewal announcement has been made; this, teamed with the lack of Park Pass availability, has even seen the theme park crisis be taken to court.

As for Disney World, the four options of Annual Pass – Incredi-Pass, Sorcerer Pass, Pirate Pass, and Pixie Dust Pass – are all currently suspended. This comes at a time when Disney Parks is boasting billions in revenue and Guests are experiencing massive crowds, long lines, and increasing difficulty in planning their Disney vacations.

Will you be heading to the Disney Resort to pick up the Annual Passholder perk? Let us know in the comments down below!