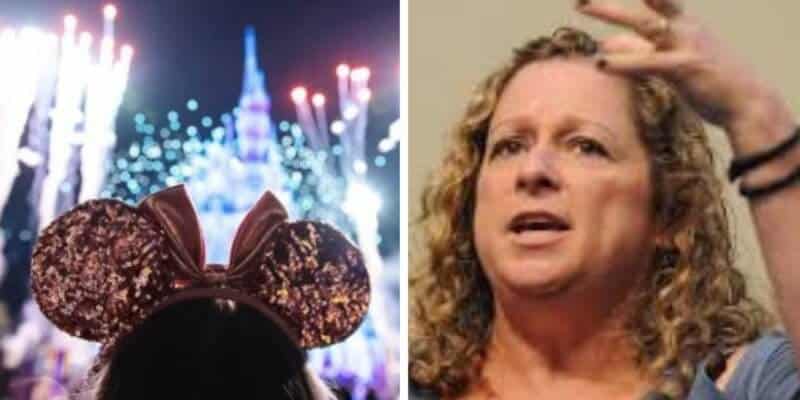 The official trailer of The American Dream and Other Fairy Tales (2022) has arrived, and it’s a profound preview of whats to come in its September release. Directed by Kathleen Hughes and Disney family descendant Abigail E. Disney, the film “looks at America’s dysfunctional and unequal economy and asks why the American Dream has worked for the wealthy, yet is a nightmare for people born with less,” according to its logline.

The trailer opens with a voiceover from an unknown source set to old, idyllic footage of Sleeping Beauty’s Castle, as well as other scenes from around Disneyland’s grounds.

“Disneyland was not like anywhere else on Earth. When I started working at the Park, the employees were so happy to be there,” the unknown former Cast Member said. “The company appreciated you. At least it did.”

Abigail E. Disney appears on screen next, summarizing what its like to live with the Disney family name.

“Having the last name Disney is like having a weird superpower you didn’t ask for,” Disney said. “But then one day I got a message from a guy named Ralph who worked at Disneyland.”

Next, Disney gathered a group of individuals to ask some hard hitting questions about Disney employment experiences, resulting in some concerning responses.

“How many of you know someone at Disney who’s slept in their car in the last couple of years?” Disney asked, with quickly raised hands interuppting her prompt. The response was the same when the group was asked if they also knew a Disney employee who had gone without medical care.

The words “This is the film Disney does not want you to see” appeared in bold across the screen not even a minute into the powerful teaser.

Disney is next seen in a clip of her address to the House Financial Services Committee regarding the illusion that is the American dream, citing a wage disparity issue that goes far beyond her family’s company.

“Disney could raise the salary of workers to a living wage,” she said to the political group. “It was possible to do this when my great uncle and grandfather built the company, and its possible now.”

The trailer also includes heartbreaking stories of full time Disney employees who are responsible for the “pixie dust” that Disneyland Guests have come to expect, yet even in combining their salaries, they still fall below the poverty line.

“A custodian would have to work for 2 thousand years to make what (former) CEO Bob Iger makes in 1,” Disney shared in a shocking statistic, before another voice called the Disney company “ground zero in the widening inequality of America.”

This is of course in reference to a system that many feel solely benefits the wealthy and is forged on the backs of those who are inherently less fortunate, the basis for the effectual film.

“This isn’t just a Disney story,” Disney shared in the clip. “It’s the story of nearly half of American workers who can’t make ends meet,”

The full trailer for the film that Disney Tweets is her “love letter to and cry of outrage on behalf of the beautiful people who keep Disney ticking every day” can be viewed by clicking here, or by heading to Abigail E. Disney’s Twitter account linked below.

I hope you’ll check out our trailer–@amerdreamdoc is in select cities and avail on VOD on Sept 23. It’s my love letter to and cry of outrage on behalf of the beautiful people who keep Disney ticking every day.

I hope you'll check out our trailer–@amerdreamdoc is in select cities and avail on VOD on Sept 23. It's my love letter to and cry of outrage on behalf of the beautiful people who keep Disney ticking every day. https://t.co/zrCf43P2fr

According to the official website, “The American Dream and Other Fairy Tales opens in Orlando on September 16 and in New York, additional markets, and on VOD on September 23, 2022.”

What do you think of Abigail E. Disney’s new film? Let us know in the comments below.