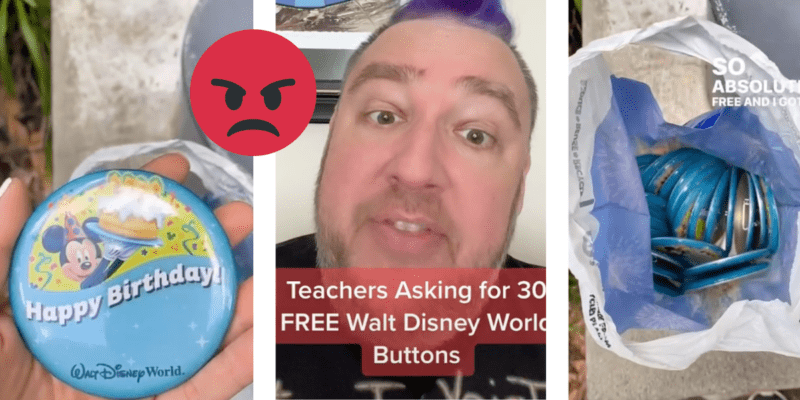 A Walt Disney World or Disneyland Resort can be expensive. So when Disney Parks Guests have a chance to grab a freebie – like a “Happy Birthday” or “I’m Celebrating” button – many jump at the chance!

If you visit any Disney parks for summer break, don’t forget to get your next class a set of buttons to give on their birthday! I will do half birthdays for those with summer birthdays. They are free. Ask any cast member where you can get FREE birthday buttons and they will direct you. I got mine at a gift shop at Animal Kingdom. #elementaryteacher #disneyteacher #freeteacherstuff #birthdaygift #birthdaybutton

In the video, Aguilar explains that she asked for about 30 free “Happy Birthday” buttons at Disney’s Animal Kingdom so that she could give them to her students throughout the year. While many comments on her original video were supportive, @lynsey_h90 said:

And this is why they take stuff out of the parks! Abuse of free items is sad!

“I asked a cast member. I didn’t just take them,” Aguilar responded. “I made sure that it was okay.”

“The buttons aren’t there to supply your classroom,” @john_8477 wrote. “You and people like you are going to cause Disney to take them away.”

“I didn’t take them. I asked for them,” Aguilar said. “There is a difference. If I would have been told no, I would have said thank you anyways and let it go.”

The former Cast Member typically posts positive stories from his time at Walt Disney World Resort but felt he needed to speak out even if he lost followers.

“Let me tell you what’s going to happen. You’re going to lose this benefit because of greed,” he said. “Now, my mom was a school teacher. I know how it is. She used to ask for 20 Happy Meal toys every time we’d go through McDonald’s, and I was embarrassed as h*ll. You know, they’re not there for that. They’re not there to supply your classroom.”

The TikToker explained that the buttons probably only cost Disney a couple of cents. But if this trend picks up, it could turn into hundreds of thousands of buttons:

“Based on the 8,185 people that liked that post, okay? Let’s assume they’re all teachers. Now, remember, 8,185 is a tiny, tiny, tiny, tiny, tiny fraction of the number of teachers in the United States and of the number of teachers that go to Walt Disney World. So, if 8,185 teachers went to Guest Relations and requested 30 buttons, that would come out to like 245,550, okay? Buttons. I mean, that’s almost – it’s more than a quarter of a million buttons, right? And we’re talking if all the buttons asked for by teachers – we’re talking well over a million buttons, okay?”

The former Cast Member argued that since Disney is a business, they’ll happily take away free buttons and sell them in merchandise locations and on shopDisney for $5.95 a piece.

“So my prediction is if people continue to do this kind of crap, Disney’s going to take them away altogether,” he said. “Stop doing it! You’re ruining it for everyone else. Sh*t!”

Commenters were split. Some said there’s nothing wrong with taking as many buttons as you like as long as you ask a Cast Member, while others agreed that Disney might take the freebie away if too many Guests take advantage.

Aguilar responded to many comments on the video, including one from @gigioneilli, who wrote, “I would never do this! Some people have no shame.”

“You’re right. I have no shame in asking people for things for my students and classroom,” Aguilar replied. “Do you want a link to my Amazon wishlist?”

Many commenters suggested Aguilar buy some chocolate, pencils, or another cheap souvenir for her students instead of taking the free buttons. She explained that her son was gifted this Walt Disney World Resort vacation and that her family could never afford to go on their own. Additionally, many of Aguilar’s students are from low-income families and have to be fed three meals at school – so a Theme Park vacation isn’t on the table for them.

“Eventually teachers will be told no,” Aguilar said in response to comments suggesting she’ll start a negative trend with her video. “In the meantime thousands of students will have a little Disney magic added to their day.”

“Agree to disagree but don’t get upset when Disney cuts out the freebies because of this behavior! Be best,” the former Cast Member wrote.

What do you think of this situation – should teachers be allowed to take extra buttons for their students?