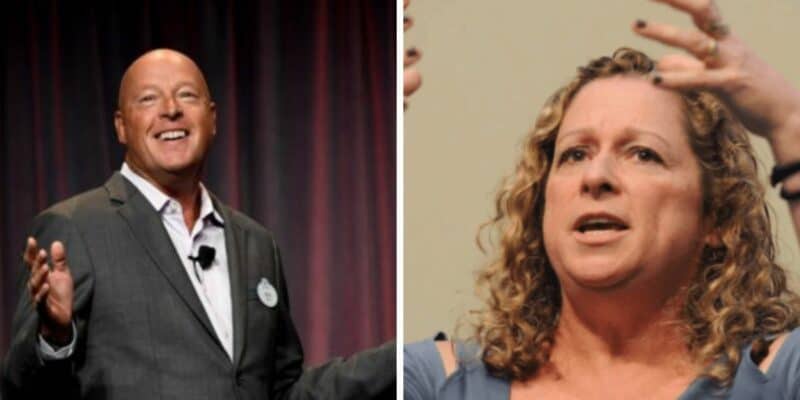 Many feel as though Bob Chapek is not taking the company in the appropriate direction, and therefore, a petition asking Disney to fire Chapek was created (by an anonymous user) and has gained the attention of many Disney fans worldwide.

Now, another petition is beginning to gain traction, this time asking Disney to fire Chapek and hire Abigail Disney instead.

Disney heiress, daughter of Roy E. Disney, and granddaughter to Roy O. Disney, Abigail Disney has been a fervent supporter and advocate of workers’ rights, and has spoken out multiple times regarding how the Walt Disney Company is currently being ran. In fact, recently, Abigail Disney spoke to The Hollywood Reporter, saying:

“Bob Chapek was the guy who presided over all of the changes at Disneyland and Disney World that we’re talking about in this film — dynamic scheduling, a euphemism for jerking them around so they can’t get a second job and they never make 40 hours a week and they don’t qualify for health care.

Now, a petition is making its rounds on the internet, asking Disney to fire Bob Chapek and replace him as CEO with Abigail Disney.

The petition, which has almost reached its goal of 1,500 signatures, reads:

Ever since he became CEO of The Walt Disney Company on February 25, 2020, Bob Chapek has made Disney worse & worse over time. He has allowed the cancellation of projects such as The Owl House and Nimona, along with funding bills and organizations that will put LGBTQIA+ people in grand jeopardy. This has gone far enough, and he needs to be stopped. Remember the time back in the 1990s when Michael Eisner was ruining Disney, the person trying to save it was Roy E. Disney. Well, His daughter Abigail Disney is also highly critical of the company. I think its time we need a new CEO that actually cares for the safety of its fans, which is why i am calling upon the Board of Directors of The Walt Disney Company to fire Bob Iger and replace him with Abigail Disney. Putting her in charge of the company would be doing everyone a big favor, as she is against anti-LGBTQIA and is an active philanthropist.

The petition currently has a little over 1,000 signatures.

Do you think Disney should fire Bob Chapek and hire Abigail Disney? Let us know in the comments below.