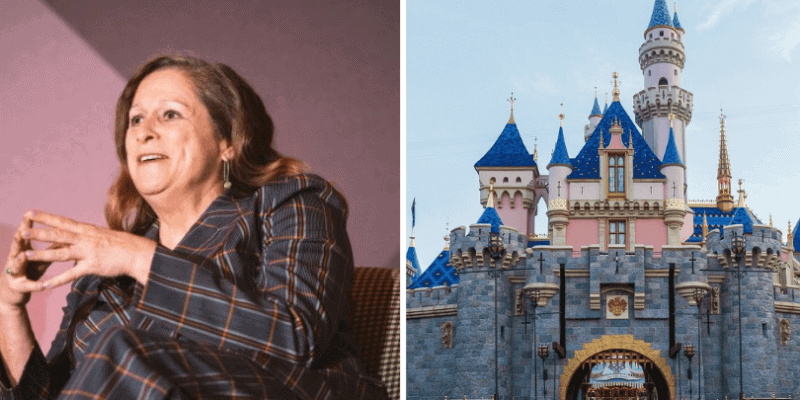 It’s not every day an heiress visits Disneyland…and it may be even rarer for the heiress of The Walt Disney Company to visit the Happiest Place on Earth. Heiress to the Disney fortune Abigail Disney recently went to Disneyland Resort and says she was “livid” after seeing the working conditions there.

A message from a distressed worker prompted Abigail Disney to go undercover to Disneyland to understand the grievances that employees of The Walt Disney Company face. Yahoo! reports that Abigail Disney found Disneyland Resort to be a façade that was about to crack under pressure.

“Every single one of these people I talked to were saying, ‘I don’t know how I can maintain this face of joy and warmth when I have to go home and forage for food in other people’s garbage,’” she recalled in an interview, saying that it was not the work environment her grandfather Roy O. Disney sought out to create.

“I was so livid when I came out of there because, you know, my grandfather taught me to revere these people that take your tickets, that pour your soda,” she continued. “Those people are much of the recipe for success.”

Abigail Disney, who is also a filmmaker and philanthropist, discussed her experience going undercover at Disneyland when she appeared on the weekly Yahoo! news show “Through Her Eyes,” hosted by human rights activist Zainab Salbi, that explores contemporary news issues from a female perspective. During her interview, she also shared that she aims to bring The Walt Disney Company’s pay practices to light in an effort to preserve a work culture of respect that originated with her grandfather, Roy O. Disney, Walt Disney’s brother.

“When my grandfather worked there, he hired people there to have a job for life,” she said, sharing her belief that the company’s respect for its workers has gradually declined over the past few decades.

This isn’t the first time Abigail Disney has called out The Walt Disney Company (and chairman and CEO Bob Iger in particular) for its pay practices. Back in April after it became known that the CEO made $65.6 million during the 2018 fiscal year, the heiress called Iger’s corporate payout “insane” and shared that it has a “corrosive impact on society.” According to her calculations, Iger could have awarded a 15% raise to every Disneyland employee and still pocket $10 million in his own compensation. Following Abigail Disney’s interview with Fast Company, The Walt Disney Company issued a statement in defense of the pay structure, specifically regarding how they compensate Disneyland employees.

“Disney has made historic investments to expand the earning potential and upward mobility of our workers, implementing a starting hourly wage of $15 at Disneyland that’s double the federal minimum wage, and committing up to $150 million for a groundbreaking education initiative that gives our hourly employees the opportunity to obtain a college or vocational degree completely free of charge,” the statement read.

The Walt Disney Company has yet to issue another public statement in response to Abigail Disney’s most recent interview sharing her qualms with the working conditions at Disneyland Resort. We’ll update this article as this story develops.