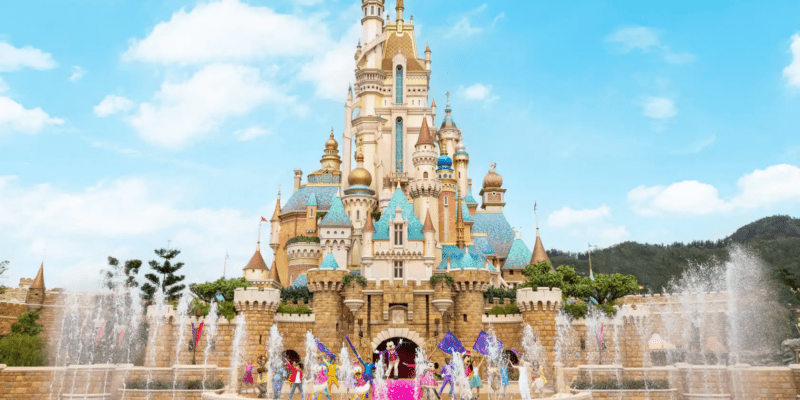 Disney Parks worldwide offer Guests the chance to meet a wide variety of Disney characters. Whether their favorite character is from the Marvel Cinematic Universe, the Star Wars franchise, or a Disney original, Guests can meet and interact with Mickey and Minnie Mouse, Goofy, Donald, Chip and Dale, Winnie the Pooh, Captain Jack Sparrow, Iron Man, Spider-Man, Chewbacca, Kylo Ren, and many more, adding some extra Disney magic to their experience at the Parks and creating emotional memories for the young and the young at heart.

As if all those characters weren’t enough, Guests will be able to meet a new friend at two Disney Parks very soon!

Disney Parks (@DisneyParks) shared the news on Twitter, quickly gathering over 300 responses and 1,000 likes from fans eager to meet LinaBell, Duffy’s curious and intelligent friend, who will be making her debut at Tokyo Disney Resort and Hong Kong Disneyland later this year!

HKDL Fantasy (@hkdlfantasy) shared that additional details regarding the arrival of this adorable and clever character to Hong Kong Disneyland would be released in August.

More experience with LinaBell will be announced in August!

More experience with LinaBell will be announced in August!

They also shared a video from a new piece of art that appeared outside City Hall on Main Street, U.S.A., celebrating LinaBell’s arrival to the Park on September 9.

Upon the announcement of LinaBell’s debut date at HKDL, a piece of pavement art also appeared outside City Hall hinting LinaBell’s arrival on SEPT 9.

For those unfamiliar with Duffy and his friends, the Walt Disney Imagineering website tells Duffy’s story as follows:

With the rise of Duffy’s popularity, Imagineers noticed many guests purchased multiple plush of Duffy, giving the bears unique names and costumes. That inspired Imagineers to create a companion to Duffy—his best friend, ShellieMay. Based on the pair’s increasing popularity, Imagineers decided to develop an entire collection of characters, each with a distinct personality and talent: artistic cat friend, Gelatoni, dancing rabbit friend, StellaLou, inventive dog friend, CookieAnn, and musical turtle friend, ‘Olu Mel. Learn more about Duffy’s friends and their stories created by Imagineers here.

LinaBell was the latest friend introduced to Duffy’s group. She made her debut at Shanghai Disney Resort on September 29, 2021, and has been a fan-favorite character since. Disney Parks Blog describes LinaBell and her story as follows:

She is a fox with an inquisitive mind and the intelligence that supports it. She finds joy and excitement in solving problems and mysteries.

Duffy met LinaBell when he was lost in the forest following a butterfly. LinaBell suddenly but masterfully took out her magnifying glass and started examining “clues” on Duffy’s body to figure out where he had come from. Thanks to her detective-like talent, Duffy was able to be reunited with Mickey Mouse. Duffy and the rest of the friends are often in awe of her ingenious ways of solving problems.

LinaBell teaches all of us to look around for clues. You never know; clues to our problems might be right in front of our eyes, and we just don’t know it!

LinaBell will surely have a warm welcome from Guests at Hong Kong Disneyland when she makes her debut at the Park on September 9 and quickly become a fan favorite.

Hong Kong Disneyland, located near Penney’s Bay, Lantau Island, Hong Kong, s an incredibly popular Park that brings in millions of Guests each year. After opening in 2005, Guests quickly came to love the theme Park as much as Walt Disney World Resort or Disneyland Resort! Like its American counterparts, Hong Kong Disneyland has a ton of Disney Hotels to visit!

The entertainment offerings at Hong Kong Disneyland are beyond magical. Momentous recently made its debut, mesmerizing Guests with over 20 minutes of music and a stunning combination of multimedia elements, including projection mapping, water projections, theatrical lighting, lasers, choreographed water fountains, flames, pyrotechnics, and firework effects.

The Park also modified its daytime entertainment offerings, providing Guests a fun and magical way to cool down and beat the summer heat while they enjoy everything there is to see and do at Hong Kong Disneyland! You can read more about these changes by clicking here.

Are you excited to meet LinaBell at Hong Kong Disneyland? Let us know in the comments below!

Comments Off on A New Friend Is Coming to Disney Parks Soon!