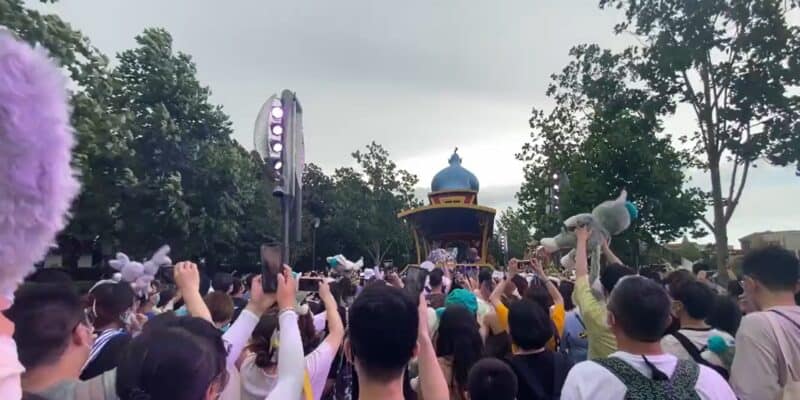 On June 30, a Disney Character’s birthday caused swarms of Guests and Disney theme park fans to chase after a parade float that the character Gelatoni the Cat was performing on.

Last week, we shared the exciting news that the Shanghai Disney Resort and Shanghai Disneyland would be reopening on June 30, 2022, after a prolonged stint of indefinite Park closure due to the COVID-19 virus.

The highly anticipated reopening of Shanghai Disneyland Park has resulted in huge crowds, with legions of Disney fans descending upon the theme park — and a swarm of enthusiasts chasing after a parade float.

On June 30 this year, the Duffy and Friends character Gelatoni the Cat also celebrated his 8th birthday, the date coinciding with Shanghai Disneyland’s reopening.

As the reopening of the Shanghai Disneyland theme park coincided with the special occasion, many Gelatoni fans took the chance to visit the Shanghai Disney Resort to celebrate the special event — in the hopes of catching a glimpse of their favorite Cat and spreading the birthday cheer with and among other fans.

Twitter user @gourmetdyy was present at the Shanghai Disneyland Parade, and captured the following video of the Disney Park visitors chasing the dancing Disney character Gelatoni on a parade float:

Here’s a closer look at the birthday cat Gelatoni conducting the singing crowd of Shanghai Disneyland Guests following behind the parade float — with Gelatoni hats, headbands, and waving plush toys:

Who is Gelatoni the Cat?

So who is the Cat who inspired this craze?

Gelatoni is a Cat is part of the Disney Park Duffy and Friends lineup — for the uninitiated, Duffy the Disney Bear is the stuffed teddy bear of Mickey Mouse himself, made by Minnie Mouse to accompany Mickey when he was lonely out at sea — yes, it’s that meta.

Starting in Walt Disney World’s Downtown Disney in 2002 and gaining massive traction in the Tokyo Disney Resort, Duffy and Friends is the expanded range of characters that have become synonymous with Disney Park brand, especially in Asia — and now hugely popular in Hong Kong Disneyland and Shanghai Disneyland.

Gelatoni the Cat was conceptualized and designed by Walt Disney Imagineering veteran Ethan Reed, as a loveable Artist Cat who lives in and around Tokyo DisneySea’s Mediterranean Harbor — and is a good friend to Duffy, ShellieMay, StellaLou, CookieAnn, OluMel, and the newest addition, the current Shanghai Disney Resort exclusive, LinaBell.

Reed himself has been directly involved in the design of Gelatoni, StellaLou, CookieAnn, and most recently, LinaBell for Shanghai Disneyland, working to bring these fluffy critters to the Disney Parks.

This year, creator Reed (who also goes by the username @gelatonisdad on Twitter, and @ethan.f.reed on Instagram), celebrated Gelatoni’s birthday with the following post and caption:

Hard to believe 8 years ago today Gelatoni started showing people all over the world to look for the beauty in all things!

What things has Gelatoni inspired you to create?

It’s clear that this adorable feline friend has a massive following — not just in one Disney Park, but all over the world.

International Disney fans weighed in, with @ikbenwezz on Twitter commenting on the throng of fans:

Gelatoni cult! I’m all here for it

A fan over in Japan, @harry_tdrfun, comments on Shanghai Disney Resort fans’ seeming obsession with the creative feline:

“Gela[toni] has become so popular

7/4 was when the official merchandise released, right?”

It’s clear from the videos that this near-rabid enthusiasm for the entire lineup of Disney’s Duffy and Friends is not going to wane any time soon — in fact, with Gelatoni himself so readily giving the crowd what they want — fans ought to expect more happenings like this in the future.

What do you think about the Gelatoni craze and the Guests’ actions?  Share your thoughts down below!

Only a short flight away from Hong Kong Disneyland, the Shanghai Disneyland theme park in the Shanghai Disney Resort is home to the iconic ‘Enchanted Storybook Castle’, first-ever ‘Tron Lightcycle Power Run’, as well as state-of-the-art ‘Pirates of the Caribbean: Battle for the Sunken Treasure’. Close to the Toy Story Hotel and the Shanghai Disneyland Hotel, the Disney Park houses ‘Mickey Avenue’ (Shanghai Disneyland’s answer to ‘Main Street USA’), ‘Adventure Isle’, ‘Treasure Cove’, ‘Toy Story Land’, ‘Marvel Universe’, and the upcoming ‘City of Zootopia’, currently being built and scheduled to open in 2023.