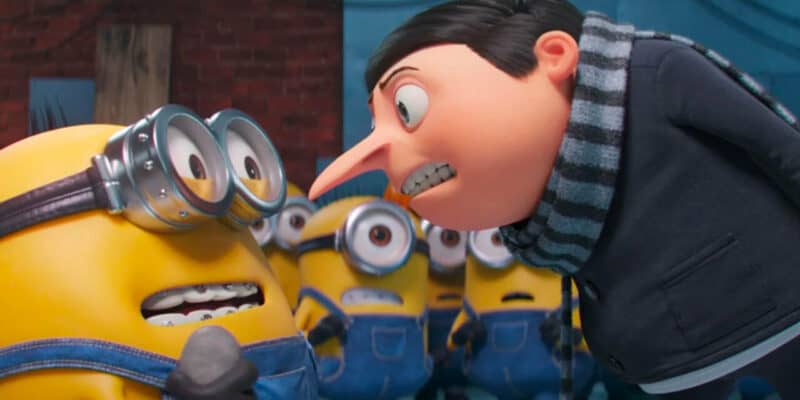 Minions: The Rise of Gru (2022) is the latest installment in Illumination’s Despicable Me franchise. It grossed a whopping $158 million in its first four days at the box office, making it the largest Independence Day weekend release in cinematic history.

The film tells the backstory of the lovable yellow creatures as they meet young Gru, set years before the events of Despicable Me (2010).

Though much of the demand for Minions: The Rise of Gru was from children and families – the film’s target audience- some of it came from the meme-ification of the Despicable Me franchise.

This follows a similar social media trend in which users feigned excitement for Sony’s Morbius (2022), leading to a theatrical rerelease that flopped more than the original premiere.

The events surrounding Minions: The Rise of Gru may have given Illumination more profit than Sony received for Morbius, but it’s also caused more damage. Young fans have been kicked out of theaters for unruly behavior, some going so far as to damage movie screens permanently.

How Did The #Gentleminions trend start?

The #Gentleminions trend started on TikTok ahead of the release of Minions: The Rise of Gru. The group comprises teenage and young adult fans of the Minions (2015) sequel. Most of the Gentleminions are respectful, simply dressing in full suits/formal attire or in Minion costumes to attend the film.

The group is split between true fans of the Despicable Me franchise and young people ironically supporting the film. Unfortunately, horrible actions by a few have ruined things for most of the Gentleminions looking for a fun day at the movies.

On July 2, a viral video showed young men in suits and yellow Minions costumes hurling bananas at a movie theater screen, chanting and causing chaos just a few minutes into a screening of Minions: The Rise of Gru:

Later, a movie theater employee confirmed that the young Guests caused permanent damage to the fragile movie theater screen, which will cost thousands of dollars to replace.

A former movie theater employee expressed concern about the impact this would have on the lower-wage workers at the movie theater in a TikTok:

“The company is going to make up for lost costs somewhere,” @movie_daddy explains. “The easiest cost to cut is labor. That means they are going to not schedule their employees as much as they should. So the employee who works 35 hours a week in order to survive will now suddenly be only working 25 hours a week. And when you’re living paycheck to paycheck and you rely on that job, that is a huge hit.”

Though this was the most viral disturbance, it certainly wasn’t the first. On July 4, Twitter user @CultureCrave posted a photo of a sign from a movie theater stating that any Guests in suits or any formal attire would be banned from seeing Minions: The Rise of Gru:

Theaters are starting to ban #GentleMinions groups from entering due to 'recent disturbances'#Minions2 pic.twitter.com/KK7v46pJvN

In another viral video, a movie theater employee warned Guests that screaming, clapping, and any unruly behavior would not be tolerated during the Minions: Rise of Gru screening.

“We will call the cops on you,” the employee says in the viral video. “Also, it is against the law to record… if we see you recording, we won’t even give you a warning. We’ll just call the cops.”

Imagine being a parent unaware of the meme chaos & hearing this warning before #Minions 😂💀 pic.twitter.com/r0Rx909wrA

More on Minions: The Rise of Gru

Headed to theaters soon? Here’s what to expect from Minions: The Rise of Gru:

Long before he becomes the master of evil, Gru (Oscar® nominee Steve Carell) is just a 12-year-old boy in 1970s suburbia, plotting to take over the world from his basement. It’s not going particularly well. When Gru crosses paths with the Minions, including Kevin, Stuart, Bob, and Otto—a new Minion sporting braces and a desperate need to please—this unexpected family joins forces. Together, they build their first lair, design their first weapons, and strive to execute their first missions.

Be sure to be respectful of movie theater employees and fellow Guests if you’re headed to see Minions: The Rise of Gru.