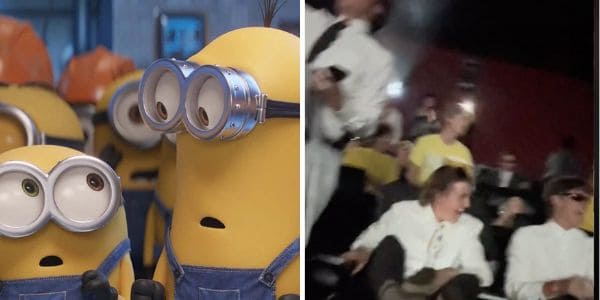 One of the most-talked-about new films of 2022 may surprise, it may shock you, it may even leave you feeling…yellow? That’s right, Universal along with Illumination Entertainment have just released one of the biggest movies of the year in the form of Minions: The Rise of Gru (2022).

The movie has become somewhat of a meme on social media platforms like TikTok, Twitter, and YouTube. While the demand for the film is real, hundreds of thousands of fans are joining in in a somewhat “ironic” manner, similar to the reaction to Sony’s Morbius (2o22), although Minions: The Rise of Gru has benefited far more from becoming a meme.

The film has proved to be a huge success already. The Universal Pictures and Illuminations Studios film hit theaters this past weekend and is projected to do astronomical numbers. The initial numbers show that the film will pull in an estimated $130 million during the holiday weekend in the U.S. and could even surpass $200 million worldwide.

Fans have shared their intense experiences at showings for this movie and one, in particular, was quite the event. In a video shared by @ayoletsgrub on TikTok, dozens of Guests showed up to watch the new film only to get kicked out shortly after the movie started. See the video below:

As you can see in the video, hundreds of passionate fans of the Minions showed up to a showing of Universal’s much-anticipated Minions: The Rise of Gru. Most showed up in their “Sunday best” complete with dress shoes and ties to enjoy the newest entry in the Despicable Me universe.

However, some in the audience took their excitement to a new level, jumping up and cheering, some even throwing bananas at the screen. This is what caused the theater to remove all Guests and escort them from the showing.

This type of activity is strictly prohibited, although were can’t imagine the rules have ever or will ever be broken in this way again.

Here’s what you can expect in Minions: The Rise of Gru:

Will you be seeing this new movie soon?