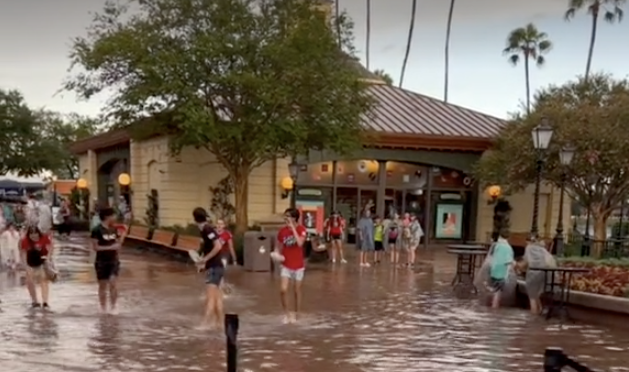 Central Florida in the summertime can be a force to be reckoned with from a weather standpoint. During the summer season, the Sunshine State often isn’t so sunny — in fact, according to Weather 25, Florida residents and travelers “should expect an average of 15 to 22 days of rain, so be sure to bring along a waterproof jacket to stay dry this month!”

Over the course of the year, Florida typically receives 55 inches of rain compared to the national average of 38 inches — hurricane season, which officially runs from May through September, accounts for much of this rainfall.

Although Orlando is not situated on the coast, and typically doesn’t sustain severe damage from tropical storms and hurricanes, it is still a sub-tropical locale that receives lots of summer rain. This can lead to some interesting experiences for theme park Guests who find themselves dealing with flooding.

They say go to Disney in the summer! They say it will be fun! They forget to tell you it is hotter than the surface of the sun and it rains everyday.

They call it Hurrican [sic: Hurricane] Season for a reason. Preparw [sic: Prepare] for heat and rain while at Disney! An umbrella or a poncho is a must have while at the Parks!

Ahead of EPCOT’s 40th anniversary this October, the Park is in the midst of a massive overhaul that includes the addition of new rides and attractions — including the aforementioned Journey of Water and the recently opened Guardians of the Galaxy: Cosmic Rewind roller coaster — a reimagined entry, and several new “neighborhoods” like World Discovery and World Celebration.

Related: Photo Reveals Changes Being Made to EPCOT’s Germany Pavilion

At this time, Disney has not confirmed plans for EPCOT’s 40th birthday, but previously filed permits and patents have hinted at a celebration.

What do you think about this week’s EPCOT flooding?