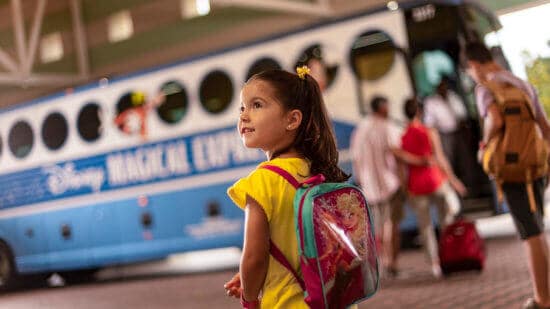 Among these was confirmation that the immensely popular Disney’s Magical Express bus service would be ending permanently, effective January 1, 2022.

Since Magical Express ended, several alternative options have emerged. These include the Roaring ’20s-themed Sunshine Flyer and Mears Connect, which is operated by the same company Disney partnered with to offer Magical Express to Guests.

For Disney Magical Express loyalists, though, nothing has come close to bringing as much joy as Disney’s official bus service option — when news broke that the Brightline high speed rail station that was slated to built at Disney Springs had fallen through, many Disney World fans began hoping that this would signal a Magical Express return.

And while Disney has not announced anything regarding the return of their own airport bus transportation option — though they have hinted at future transit options in Guest surveys — an FAQ result on the official Walt Disney World Resort website just may be giving Magical Express fans false hope.

As you can see in the above screenshot from today, July 30, 2022, Disney’s “Airport Transportation and Check In – Frequently Asked Questions” page still reads:

Your best option is to fly into Orlando International Airport (MCO). From there, Disney Resort hotel Guests can take Disney’s Magical Express service, a complimentary round trip service…

Related: The Orlando Airport Is Getting a Major Upgrade For Disney World Travelers

It is worth noting that on another FAQ page, Disney notes that Magical Express ended on January 1, 2022.

Nonetheless, the fact that not all Disney’s Magical Express references have been removed from the theme park’s official website could give hope to some fans who are still hoping against hope that either the original Magical Express or a Disney-owned alternative option is announced in the near future.

What do you think about Disney’s Magical Express ending? Should the company provide a replacement service?