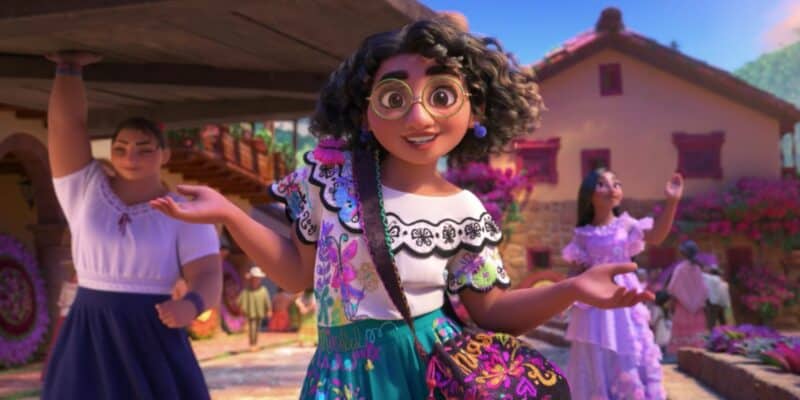 Many beloved Disney movies have been brought to life in the Disney Parks through spectacular attractions.

When you visit Walt Disney World Resort or Disneyland Resort, it’s very likely that you’ll want to spend time on some of your favorite rides that were based on your favorite Disney movies growing up as a kid.

While there are iconic attractions that were created specifically for Disney World or Disneyland without a previous movie– like Jungle Cruise, Space Mountain, Haunted Mansion, and Pirates of the Caribbean, some of which ended up spawning a movie later— most of the rides inside the Disney Parks are based on intellectual properties (IPs) of Disney that begin in the form of featured films.

In a recent Reddit thread, many Disney fans talked about their favorite Disney movies and which ones should be turned into rides at Walt Disney World Resort.

Here’s a look at 11 beloved Disney movies that fans say should have their own rides at Disney World.

Encanto has been one of the hottest Disney properties to hit theaters in the last decade.

The movie saw its popular tune “We Don’t Talk About Bruno” hit No. 1 on the charts, making it the most popular Disney song ever. In addition, Lin-Manuel Miranda who developed the songs has already shared that Disney has an Encanto attraction under development.

While Disney hasn’t confirmed anything, it seems like only a matter of time before the movie has not only a sequel but its own attraction in the Disney Parks.

Here’s what Disney says about Encanto:

Walt Disney Animation Studios’ Encanto tells the tale of an extraordinary family, the Madrigals, who live hidden in the mountains of Colombia, in a magical house, in a vibrant town, in a wondrous, charmed place called an Encanto. The magic of the Encanto has blessed every child in the family with a unique gift from super strength to the power to heal—every child except one, Mirabel (voice of Stephanie Beatriz). But when she discovers that the magic surrounding the Encanto is in danger, Mirabel decides that she, the only ordinary Madrigal, might just be her exceptional family’s last hope. Released on November 24, 2021, the film features all-new songs by Emmy®, GRAMMY® and Tony Award® winner Lin-Manuel Miranda (“Hamilton,” “Moana”) and is directed by Byron Howard (“Zootopia,” “Tangled”) and Jared Bush (co-director “Zootopia”), co-directed by Charise Castro Smith (writer “The Death of Eva Sofia Valdez”), and produced by Clark Spencer and Yvett Merino; Bush and Castro Smith are screenwriters on the film.

There have been multiple rumors of a Coco takeover of the Mexico Pavilion where the Gran Fiesta Tour Starring the Three Caballeros has resided, but nothing has happened as of yet.

Coco brought in an impressive $800 million at the box office and quickly became one of the most beloved Disney movies to be recently released.

While Disney did add a scene from Coco into the PhilHarmagic attraction, the movie still deserves its chance at a dark-ride of some sort.

Here’s what Disney says about Coco:

In Disney/Pixar’s vibrant tale of family, fun and adventure, aspiring young musician named Miguel (voice of newcomer Anthony Gonzalez) embarks on an extraordinary journey to the magical land of his ancestors. There, the charming trickster Hector (voice of Gael Garcia Bernal) becomes an unexpected friend who helps Miguel uncover the mysteries behind his family’s stories and traditions.

Disney fans have complained for nearly a decade now that Tangled— easily one of the most beloved Disney princess movies of all-time– has not had its own attraction. Instead, the movie has had to settle for its own bathroom area.

Still, Disney fans hold out hope that Tangled might somehow make its way into a Disney Park in the form of an attraction, even though it’s not likely at this point.

The floating lanterns would certainly make for a beautiful scene.

Here’s what Disney says about Tangled:

If Disney were going to have a Hercules attraction, it would have already had it by now.

There is still hope that with the live-action Hercules set to begin production that the franchise might somehow be revived. Even if it never becomes a fan favorite among the younger generations, it will certainly remain one of the top Disney movies of all time by many who grew up in the 1990s and early 2000s.

Here’s what Disney says about Hercules:

There is already one experience dedicated to The Lion King in Disney World.

You can visit Disney’s Animal Kingdom and enjoy The Festival of the Lion King, which is a spectacular show that retells the beloved story and gives Guests the opportunity to sing along to some of their favorite tunes from the movie.

However, many fans are still hopeful that the franchise might get its own ride. One Disney Guest noted that they think a Lion King ride similar to that of The Little Mermaid: Ariel’s Undersea Adventure where Guests get to sing along to their favorite songs from the movie and see their favorite characters might be fun, especially in Disney’s Animal Kingdom.

Here’s what Disney says about The Lion King:

Celebrate the glory of The Lion King as this magnificent coming-of-age masterpiece takes its rightful place as the reigning star of the acclaimed Walt Disney Signature Collection! With humor and heart, breathtaking animation, soul-stirring Academy Award®–winning music*, and revealing new Bonus Extras, this much-beloved story transports you to the Pride Lands and inspires generations of fans to find their places in the “Circle Of Life”.

There have been rumors for quite some time that Wreck-It Ralph might take over an area in Tomorrowland at Magic Kingdom.

The two rumors include one saying that Wreck-It Ralph could get its own attraction in the space where Stitch’s Great Escape used to reside. Another says they believe the beloved franchise could take over the Tomorrowland Speedway with a Candy Crush-themed ride.

Either way, rumors will continue to swirl about the IP getting its own attraction because of its popularity.

Tired of playing the role of a bad guy, Ralph takes matters into his own massive hands and sets off on a journey across the arcade through multiple generations of video games to prove that he can be a hero.

Another Disney movie that fans say belongs in Tomorrowland is WALL-E.

WALL-E is based in the future and the movie is about the lovable robot who finds a new purpose in life when he meets EVE.

With robots and the future, it makes total sense for something WALL-E-themed to be included in Tomorrowland, but it’s probably not likely to happen simply because of the popularity of the IP compared to some of the others that may be added.

Here’s what Disney says about WALL-E:

After hundreds of lonely years of doing what he was built for, the curious and lovable WALL-E discovers a new purpose in life when he meets a sleek search robot named EVE.

Another movie that has seriously been rumored for Tomorrowland is the popular franchise Big Hero 6.

Big Hero 6 made nearly $700 million at the box office and has continued to be a popular film from Walt Disney Animation Studios.

With Baymax getting his own Disney+ series, it’s clear that the property is still popular and could make for a fun ride inside of Disney World.

With all the heart and humor audiences expect from Walt Disney Animation Studios, “Big Hero 6” is an action-packed comedy adventure that introduces Baymax, a lovable, personal companion robot, who forms a special bond with robotics prodigy Hiro Hamada. When a devastating turn of events catapults them into the midst of a dangerous plot unfolding in the streets of San Fransokyo, Hiro turns to Baymax and his diverse group of friends— adrenaline junkie Go Go Tomago, neatnik Wasabi, chemistry whiz Honey Lemon and fanboy Fred — who transform into a band of unlikely heroes. Bring home Disney’s “Big Hero 6,” featuring comic-book-style action and hilarious, unforgettable characters — it’s fun for the whole family!

One of the most iconic Disney movies of all time is The Jungle Book.

The movie was so popular that it spawned its own live-action remake and, yet, there is nothing in Disney World to recognize the movie.

Several Disney fans say they’d love to see the property included at Disney’s Animal Kingdom and while it has had a couple of short-lived entertainment offerings, there has yet to be a ride or even an interactive attraction, perhaps like a playground.

Here’s what Disney says about The Jungle Book:

Now for the first time ever on Blu-ray™ with glorious digital high definition, Disney’s Jumpin’ Jungle Classic has never looked so lush or sounded so good! Beloved characters, swinging music and new behind-the-scenes bonus features make this Diamond Edition Blu-ray™ a must-have for every family’s classic collection! Meet the most unforgettable characters and embark on a thrilling adventure with Mowgli as he journeys deep into the jungle and learns “The Bare Necessities” of life from happy-go-lucky Baloo the bear. Meet Bagheera, the wise old panther, and crazy King Louie, the orangutan. But watch out for the cunning tiger Shere Khan and Kaa, the ssssneakiest snake in the jungle! Explore your family’s wild side as you venture into The Jungle Book for extraordinary adventures and a heartwarming tale that celebrates the true meaning of friendship.

Perhaps the most underrated Disney movie of all time is The Emperor’s New Groove.

Many fans noted that they think Disney is missing out by not having a coaster themed to The Emperor’s New Groove.

Imagine this, you hear: “Pull the level, Kronk!” “Wrong Lever!” and boom, the coaster takes off. It would be an absolute ball and would certainly bring back nostalgia for many Disney fans.

Here’s what Disney says about The Emperor’s New Groove:

Emperor Kuzco (David Spade) is turned into a llama by his devious advisor, Yzma (Eartha Kitt), and her hunky henchman, Kronk (Patrick Warburton). Now the ruler who once had it all must form an unlikely alliance with a pleasant peasant named Pacha (John Goodman). Together, they must overcome their differences as they embark on a hilarious, “groovy” adventure.

There’s nothing more iconic than Fantasia and that’s why many fans are still wanting to see the movie more often in the Disney Parks.

While Disney has not included a Fantasia ride, there are mentions of the beloved movie in Magic Kingdom.

Here’s what Disney says about Fantasia:

Walt Disney’s timeless masterpiece is an extravaganza of sight and sound! See the music come to life, hear the pictures burst into song and experience the excitement that is Fantasia over and over again. No family’s Disney collection is complete without Fantasia!

The opinions expressed in this article do not necessarily reflect the opinions of Inside the Magic overall.

You can read more about the movies that Disney fans want to bring into the Parks here.

What Disney movie do you wish had its own ride at Walt Disney World Resort? Let us know in the comments!