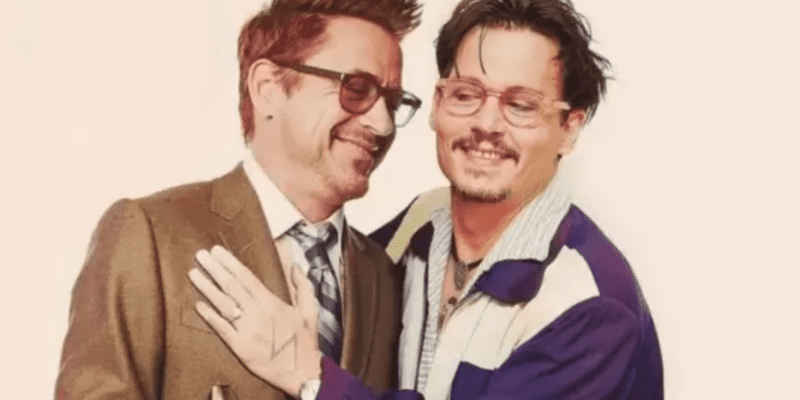 Johnny Depp, 59, (Pirates Of The Caribbean: The Curse Of The Black Pearl, 21 Jump Street, Sweeney Todd) recently sued his ex-wife, Amber Heard, 36, (Aquaman, The Rum Diary, Drive Angry Piper) for defamation after she wrote an op-ed for The Washington Post, where she referred to herself as a “public figure representing domestic abuse.”

Now, after the trial has officially ended, a longtime friend of Depp’s is speaking out — Mr. Robert Downey Jr.

Robert Downey Jr. (Tropic Thunder, Iron Man, The Avengers, Sherlock Holmes) has come a long way, dealing with substance abuse and even getting caught with heroin and cocaine. The Iron Man actor was also found sleeping in the bed of an 11-year-old boy after stumbling into a random house and passing out, according to The Guardian.

However, beginning in 2008, Robert Downey Jr. portrayed Tony Stark/Iron Man in Iron Man, Iron Man 2, The Incredible Hulk, The Consultant, The Avengers, Iron Man 3, Avengers: Age of Ultron and Captain America: Civil War, Spider-Man: Homecoming and Avengers: Infinity War and Avengers: Endgame. Now, Downey is one of the most respected actors in Hollywood.

After overcoming some personal battles and turning his life around, Downey has empathy for Johnny Depp. In fact, he has reportedly tried to get him a role in the Sherlock Holmes 3 film, and according to this video, has spoken out publicly in defense of Depp, calling him “innocent”.

Now, after the Johnny Depp vs Amber Heard trial officially came to an end, the Iron Man star is speaking out, supporting Mr. Depp.

According to Daily Mail, the Tropic Thunder actor gave Johnny Depp a FaceTime call to celebrate his win. The news came from a close friend, Josh Richman, during a charity live stream event for Children’s Hospital Los Angles.

During the livestream, Richman also said that the Pirates of the Caribbean star was “stoic” in a U.K. hotel room when the verdict news came in, whilst friends and staff “cried and screamed”.

“Even Jeff Beck flipped off the television screen,” Richman said.

A spokesperson for Depp confirmed the FaceTime call to The New York Post.

Johnny Depp released a statement after the verdict was read, which you can read here.

Amber Heard recently sat down with Today’s Savannah Guthrie in a primetime interview, which is set to air this Tuesday and Wednesday on NBC.