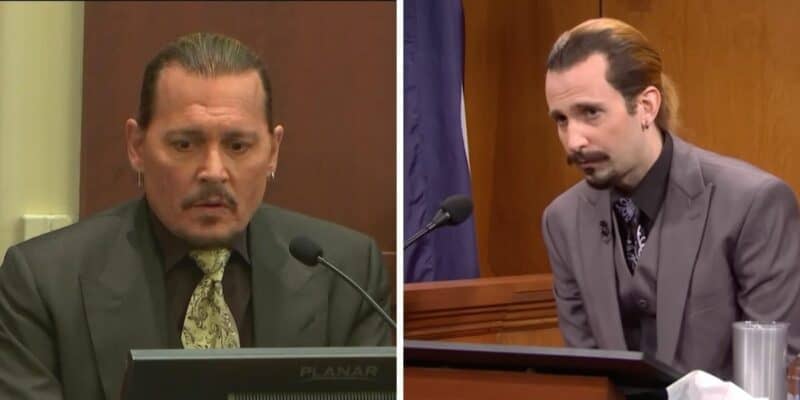 During the ongoing trial, a longtime employee of Johnny Depp’s took the stand, where they discussed a very interesting situation. Starling Jenkins III — an executive chauffer and security guard for Depp — says Amber Heard once told him that defecating in the former couple’s once-shared bed was “a horrible practical joke gone wrong.”

Ever since, this has been an ongoing topic for viewers and fans, some even making TikTok videos making fun of Ms. Heard, and others referring to Amber Heard as Amber Turd.

Comedian Chris Rock even joked about the incident during a recent comedy show. Now, Saturday Night Live is joining in on the fun as the show opened up with a skit last night focusing on the ongoing Johnny Depp vs Amber Heard defamation trial.

SNL star Kyle Mooney played the part as Johnny Depp, who was dressed nearly identical to Depp has appeared throughout the trial. Cecily Strong was also involved in the skit, playing Judge Penney Azcarate. Though some SNL viewers found the skit to be funny, others didn’t enjoy it.

I’m pretty forgiving of @nbcsnl’s normal mediocrity, but with all of the things happening in this country right now, THAT is what you went with for your cold open? Cmon.

I’m pretty forgiving of @nbcsnl’s normal mediocrity, but with all of the things happening in this country right now, THAT is what you went with for your cold open? Cmon.

the amount of people involved in snl and nobody thought “hey maybe this should be off limits” ???

the amount of people involved in snl and nobody thought “hey maybe this should be off limits” ???

There are many more Tweets from fans saying that SNL dropped the ball and should not have made a skit on the Depp vs Heard trial.

You can watch the skit below.

The Depp vs Heard trial will continue on Monday in Fairfax, Virginia.

Did you watch Saturday Night Live last night? What did you think of the skit? Let us know in the comments below.