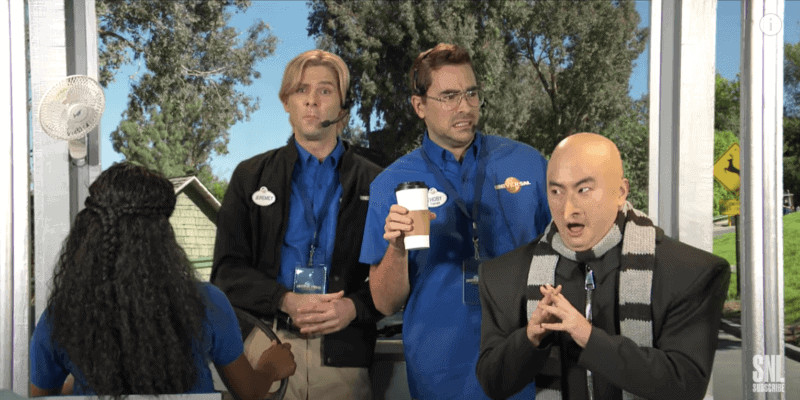 Universal Orlando Resort’s Twitter account is known for poking fun at many — especially Disney World. That being said, Disney never responds to Universal’s jokes, and the Universal theme parks keep getting away unscathed! Now, it seems Saturday Night Live (SNL) has stepped in to give them a taste of their own medicine.

As we mentioned, Universal’s Twitter account is very tongue in cheek when it comes to the way they comment on Disney, and even in their reply to guests.

Heck, they just Tweeted about their Mardi Gras tables and noted that they are not garbage cans — which was a clear dig at any EPCOT festival where every Disney fan knows you are eating on top of garbage cans once the tables all fill up.

PSA: These are to set your Mardi Gras food on. They're not trash cans. pic.twitter.com/Mww5TuqetV

Plus, the snarky comments don’t just end with Universal Orlando Resort’s Twitter, but Universal Studios Hollywood often partakes in the fun as well!

On the tram tour, we can see that. Mikey Day is Jeremy, a Universal Studios tour host. He is training Thoby (Dan Levy) who is very new to drinking coffee, and clearly a funny portrayal of a highly enthusiastic (but under trained) Team Member. The caffeine high causes Thoby to share a “dark” theory about Back to the Future, and then make some pretty funny comments about E.T.

In a Tweet that has since been deleted by Universal, the theme park responded by saying, “When did we get a tram tour and mountains?” This likely was to joke at the fact that the skit is clearly taking place at Universal Studios Hollywood, not Orlando. We are currently unsure as to why Universal removed the Tweet.

If you want to check out the entire skit, Saturday Night Live posted the whole clip to YouTube. Please note, the language used is not intended for kids, so be aware before hitting play!

Saturday Night Live has made plenty of skits about Disney World in the past as well! One of my personal favorites is when Drake is hosting a make-shift version of the Indiana Jones Stunt Show Spectacular at Disney’s Hollywood Studios! If you want to check it out, click here. All the skit was missing was Kristin Wiig and Kate McKinnon!

That being said, Universal Orlando Resort is home to Universal Studios, Universal’s Islands of Adventure, and the soon-to-be-opened Volcano Bay. With the Wizarding World of Harry Potter being one of Orlando’s most immersive theme park lands, a visit to Universal will have your jaw hitting the floor every time. Click here to begin planning your adventure today! Universal also currently has a deal where Annual Passholders can purchase a 12-month pass and receive 15 months at no extra fee. There truly has never been a better time to vacation at Universal Orlando Resort!

What did you think of Dan Levy’s skit about Universal on Saturday Night Live?