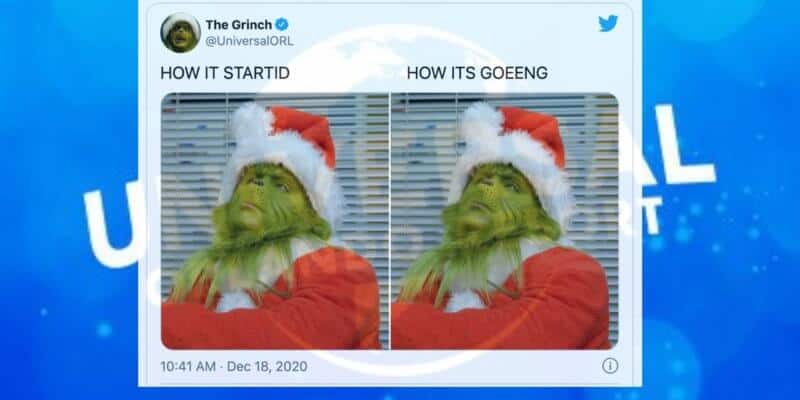 With Christmas just one week away, Universal Orlando has really been ramping up the holiday spirit! But after this stunt that they just pulled on Twitter, it looks like a certain someone may be trying to destroy Christmas cheer.

The Universal Orlando Twitter account is a personal favorite for me. They are always cracking jokes, making fun of themselves, and creating a bond with their guests which in turn somehow creates this feeling of friendship — even with a theme park. Well, it seems the lovely social media team at Universal Orlando has been kicked out and The Grinch has taken over!

This morning, prior to The Grinch hijacking the Twitter feed, Universal tweeted their park hours, but if you notice below, they said they were “Feeling green!” When I read this, I just assumed that green meant Christmas, but now it is clear that this was a little easter egg for Grinch fans everywhere!

Hilariously, The Grinch writes in all capitals so we know he is always angry and kind of yelling, even over Twitter – and clearly unable to use the platform correctly.

NEVR TRUST THE INTERN WITH THE PASSWRD INTERNS AND PASSWRDS DONT MAKE A GRATE COMBINAYSHION GET IT? HEEEEEHEEEEEHEEEEHAAAAHAAAHAAA SEND TWIT

He ends off every tweet with “SEND TWIT”, which I *think* means he wants everyone to send him tweets. I say this because The Grinch is actively answering people’s tweets to him.

And The Grinch responded,

And this keeps happening with many of the tweets that are being directed at The Grinch. He is even trying to create memes with the classic “How it started / How it’s going” template — showcasing an angry and annoyed Grinch in both photos. We truly wouldn’t expect anything less.

It seems The Grinch will be on Universal Orlando’s Twitter for the rest of the day.